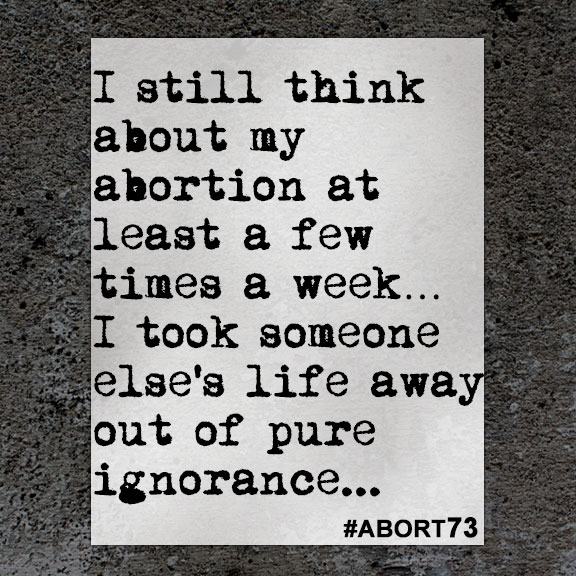 I still think about my abortion at least a few times a week… I took someone else's life away out of pure ignorance...

Eight years ago, in March 2014, I made the decision to have an abortion. I had missed my period during the second month of my pregnancy, but the first month I had mistaken implantation bleeding for a period. As soon as the test read "positive,” I was both shocked and unaccepting of the pregnancy. I was too embarrassed to tell anyone, except my current partner. I felt that my pregnancy was a "problem" and that abortion was a "solution.” I was struggling mentally at the time, and also had a relapse of my bipolar disorder. I didn't think I could handle a baby or adoption. In my ignorance, I also did not think I would feel regret or have long-term issues like I’ve had.

I called my local abortion clinic and scheduled. I remember they did a vaginal ultrasound and said I was 13 1/2 weeks. I was shocked because at that point I had only known I was positive for a month. I didn't look when they did the test. I don't know if it would have changed anything or not. I knew after they gave me the dating of the pregnancy that the person I was with at the time was not the father. It was another guy who I had dated briefly for about a month. I was given the Misoprostol after the ultrasound and asked one of the providers if I should call the father. They said he didn't need to know. I called him anyway right then and he said I should keep the pregnancy. The partner I was with at the time supported my abortion. I wanted to keep it after he said that, but I thought it was "too late" since I had already taken the medication under the tongue. About an hour later, they performed a surgical abortion.

At first, I was so relieved. I thought, "my problem is solved.” As the months went by, I found myself wondering when my baby would have been due. I started to feel a connection to the pregnancy for the first time, but it was already gone. I started to really feel anger, but it was mainly directed at myself. I felt so guilty and shameful—mainly because of the heartache and feeling like I lost a part of who I am—but I could only blame myself. I couldn't believe I may have loved my baby, but "he" was gone. I do believe it was a boy because I have had dreams about a little boy asking me questions. He always looked the same and to me, I think he would have looked Ike my son. The guilt was so hard to take that I started to have very persistent suicidal thoughts, the worst I had ever had in my life. I started to become very self-destructive and eventually had a suicide attempt about three years later. Luckily I did survive, but it could have ended up a lot worse.

I met my husband during a very dark period, but for some reason he was able to help me out of my self-destruction. We got married a year later and have been together for five years. I have a young boy now. He was born in March, the same month as my abortion. I love him so much, but it still hasn't healed the pain of the first baby I lost, and how he passed. I am now pregnant in my second trimester with our second child. I still think about my abortion at least a few times a week. I don't hate myself for it anymore, but it has taken a lot of work. I feel sad mostly about what "might have been" and that I took someone else's life away out of pure ignorance. I don't regret too much about my past, but it still hurts today even so many years later.

Thank you for listening. It's a heavy burden to bear, but I do feel lighter sometimes when I can honestly share my own story.