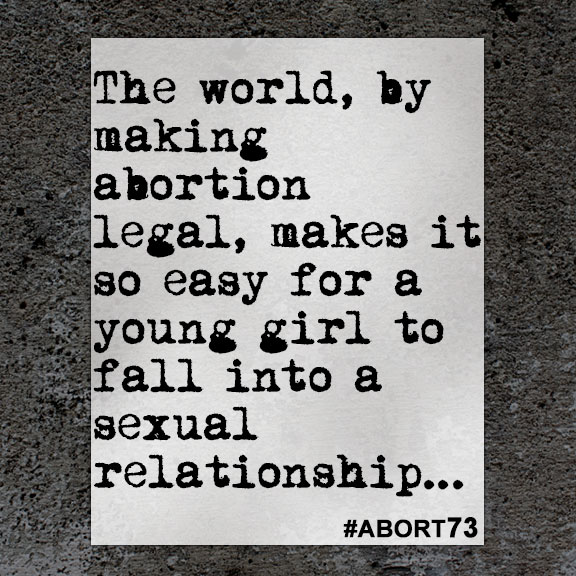 The world, by making abortion legal, makes it so easy for a young girl to fall into a sexual relationship...

I had two abortions, but if I had carried the first baby to term I would never have become pregnant with the second—because it was around the time I'd have been delivering the first. The first was in 1979. I was like a lot of young girls, 19 and in love with this guy who, when he learned I was pregnant, told me to "kill it." He wanted no responsibility. Of course that was the end of our relationship. I had to make all the arrangements. I went in and had the procedure.

A few months later, on Christmas eve, I slept with the guy I was going with at the time and I know that is when I became pregnant again. At least he took me to the place to have it done. I knew it was wrong, but I also knew that my mother would never have helped me—my dad either. Maybe my dad would've because his wife, my step mother, was a lot more understanding about these things. One of her own daughters had become pregnant out of wedlock and had the baby. Though abortion did simplify matters in my life, I knew it was wrong. I have always known it.

One thing that has always stuck out to me. The world, by making abortion legal, makes it so easy for a young girl to fall into a sexual relationship. There's always the thought that, well, if I become pregnant I can get an abortion. What if abortion had not become legal? What if it was always illegal? Would young girls find the strength to say no to their boyfriends since they knew if they became pregnant they must have the baby or give it up for adoption?

What is vastly different now than when I had mine done is that now women are proud to have abortions, brag about it, and say how wonderful it is to kill the baby—so they can preserve their career. Back in the days I had mine, we were given a paper about birth control and how to avoid this happening again. Everything was solemn since there was rather a sense of shame about doing this. We all hoped for there not to be a next time! But now some women are making abortion their birth control method.