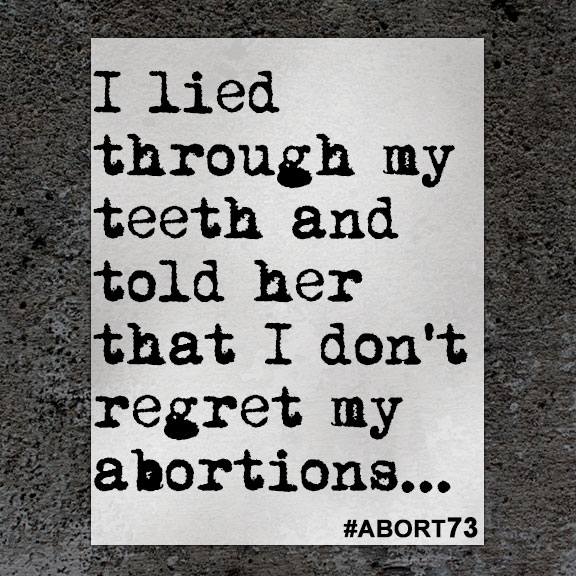 I lied through my teeth and told her that I don't regret my abortions...

I had my first abortion when I was 17. I told my parents that I was pregnant and the long-story-short is that my dad told me to either get an abortion or leave the house. This was back in 1996, but it still feels like it happened yesterday. My mom made the appointment, and my mom took me to Planned Parenthood. I was an emotional mess from the moment we got into the car until the moment I got back home. My mom yelled at me and screamed at me and told me to just forget about it and forget that it ever happened and to never bring it up ever again. I still remember the doctor and the nurse who tried to get me to relax, and I remember a moment later how I woke up in a reclining chair in some other room. But I did try to forget about it, and I did try to act like it was okay—and that I should just move on.

I was pregnant again at age 22, but this time I decided on keeping the baby. I didn't even tell my parents that I was pregnant until I was three months, part of me thinking that they would be there for me and help me instead of giving me a speech about how I wasn't ready yet. Of course, they ended up giving me that speech anyway. My mom even called me the next day and told me that it wasn't too late to have an abortion, and she already found a clinic who could do it in one day and that my mom would also pay for it.

I never listened to my mom and I never did have that abortion, and instead I gave birth to a beautiful daughter. I think I had her just to prove my parents wrong. To my surprise, my parents loved the fact that they were now grandparents, and they loved having a granddaughter. Six months before, they wanted me to abort my daughter. Six months later, they're happy to be grandparents. WHAT CAN I SAY?!?!

I was pregnant again at age 27, but this time I decided to not tell anybody about it. I felt like an abortion would be the right choice, but I wasn't 100% sure. My daughter was 4 years old at the time, and I was a single mother who was barely getting by but doing pretty good in life. I had quite a few sleepless nights thinking about what I should do, and I had nobody to turn to because I didn't want to hear anybody try to tell me what was best for me. I did go to Planned Parenthood, found out I was 8-weeks pregnant, and made an appointment for a surgical abortion for the following week. I never did go to that first appointment, but I regretfully made a phone call and booked a second appointment.

The day of that abortion is something I will never forget. All I could think about was my daughter and how I did everything I could to keep her and fight for her, and here I was pregnant again and I was going to do the exact opposite. I was exactly 10-weeks pregnant, and I put on a face—acting like this was the right decision for me, but I knew it wasn't from the very moment I walked through those doors. I walked out of that building no longer pregnant, and I tried to just forget about it.

I couldn't let those abortions affect my mind. I still had a daughter to take care of, and I loved everything about her. I tried to forget about those two decisions that I made and I tried to just live life with the life that I had.

But now my life comes full circle. I raised my daughter to stay away from sex, but to always be safe if she did have sex and to come to me if she ever needed any help in any way. I knew my daughter was sexually active when she turned 15 years old, and I knew that because she told me. It hurt me deeply knowing that she was having sex, but at the same time I was grateful that we had an open relationship where she could come to me and tell me these things.

Two weeks went by and she returned for a check-up only to find out that the medical abortion failed and that she would need to have a surgical abortion. Again my daughter never told me, and on her own she went back to have the rest of what was left in her removed. She was awake for the procedure, and I know every moment about that procedure destroyed her.

A month later my daughter came to me and started crying uncontrollably. It took her 10 minutes to relax, and it took her a ton of courage to tell me that she had an abortion. I had to be mom in that moment and I had to tell her that everything would be okay, that abortion is normal, that nothing that she did was wrong—and that I still loved her unconditionally.

I also had to have the courage to tell her about my two abortions, something that I'd never told her before. I lied through my teeth and told her that I don't regret my abortions and that if it wasn't for abortion that she more than likely wouldn't exist. I had to put on this face and tell her that what I did was natural and that everything turned out good in the end.

And maybe that's where I failed? Maybe I should have previously told her about my two abortions—that I regret them and that abortion isn't the right choice? But I never told her that.

It's been 25 years since my first abortion, and nearly 15 years since my second. I still think about it. I still think of what my life could have been if I decided on keeping both pregnancies. I'm 42 years old, and I should have a son or daughter who is 14 years old, who would be living in this house right now. I drove by the high school yesterday realizing that my son or daughter should be going to that high school in a couple months. But that's never going to happen.

And here I am sitting here realizing that I should be a grandmother in three more months. My daughter had an abortion, and that grandchild is never going to exist.

I don't know what to believe. I want to believe that abortion is wrong, but I sometimes still try to tell myself that its not that big of a deal. But I also have to be honest and tell myself that I have destroyed two lives, and my daughter has destroyed one, and we both have to somehow live with that.

I wish I could end this story on a good note but I don't see how I can do that. They say that one in three women will have an abortion, and maybe some of them don't have any regrets at all, but I'm sure a lot of them do.

I'll end it on a good note and say that I am thankful that I did not abort my daughter. My parents wanted me to abort, and my mom was willing to pay for that abortion, but I decided to keep her. I am grateful to have her, and my parents are grateful to have her. But I also know there will always be two others who are missing, and my daughter will be missing one for the remainder of her life as well.