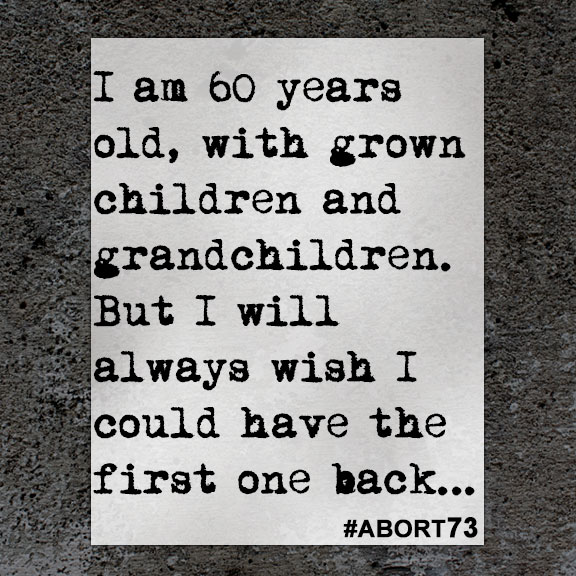 I am 60 years old, with grown children and grandchildren. But I will always wish I could have the first one back...

I found out I was pregnant at the age of 18. I was still living at home—no job and out of school. I told my boyfriend of nearly two years, and he left town "to think" for over a week, with no word. During that time, I did nothing but think. Obviously I couldn't count on him. How could I raise a baby at home with my single, divorced mom footing the bill—with three younger kids at home? What if I was a horrible mother? Could I live with giving my child away? What would my family think? Could I get and keep a job while pregnant? How painful is childbirth? Is it right or wrong? It was legal, and everyone said the fetus wasn't a "real baby" yet, right?

My boyfriend came back after I had made up my mind to have an abortion. He was happy and relieved. It was the first grown-up decision I ever made, and I came to it with only a few pamphlets the counseling center gave when they told me the news. I went to the appointment and "chickened out,” my boyfriend said. He was mad; I told him I would do it. The nurse said I was just afraid of the procedure once it was explained to me, so she made another appointment where I would be put under, instead of awake for the abortion.

Two days later, I went to a different facility. Determined and still thinking it was what I should do, I went inside and got started. I was on the table and a nurse was attaching things to me—the IV and all those wires to monitor my heartbeat and everything. Suddenly I was crying and I said "STOP, I don't want it." The nurse said I was just afraid. She said once she administered the drug I'd start to relax and when I woke up it would be over. I said "NO. I don't want an abortion. Let me up.” I was in a position on the table with my feet in stirrups and my arm sticking out with the IV in it. She said, “No, you already paid for the procedure, and we've already started. There, I've administered the medication that makes you drowsy and you'll be finished in no time.”

Then I was out.

I woke up at the sound of someone vomiting. It wasn't me. I was in a small room—a hallway maybe—with four other girls, on hospital tables against the walls. Two were vomiting and one was groaning. The other two were crying. One of them was me. I had killed my baby. It was too late. I had done it. I planned it, and it was my fault. I should have known when I couldn't go through with it the first time. And once I was on the table, the nurse wasn't going to take “no” for an answer. Too late. Much too late.

I left there as soon as I could use the restroom on my own. I was sent out a different exit that came out in a back parking lot. For all the talk of it being legal and nothing wrong with it, once it was done, I was treated like trash—stuck in a hallway with the other trash, sent out the back door so no one would see me. No follow up consultation or questions. Done.

I married the boyfriend and we had three other children, then divorced. He told our daughters about the abortion, to make them see that I wasn't perfect. That led me to tell my mom and my two sisters. My brother I had already confided in, the day of the abortion, when the boyfriend dumped me off at my house. I didn't realize I had the yellow antiseptic "paint" they covered you with all over my thighs. I was wearing shorts and he asked me what it was. He kept my horrible secret and even took care of me for a long time. We never spoke of it again.

I will never forgive myself for murdering my first child. Now I am 60 years old, with grown children and grandchildren. But I will always wish I could have the first one back.