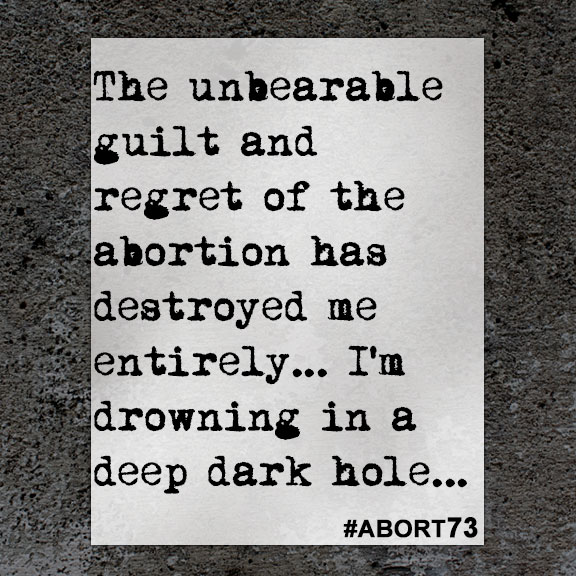 The unbearable guilt and regret of the abortion has destroyed me entirely… I’m drowning in a deep dark hole...

I thought I was doing the right thing in getting an abortion. I knew we didn’t have the time, money, or patience to raise a child and that I would be ruining my boyfriend’s life and that child’s life as well. I didn’t realize that it would affect me as much as it has. The unbearable guilt and regret of the abortion has destroyed me entirely. All of this pain and heartache is too much to live with. All I feel is am overwhelming empty sadness that won’t go away. I am so angry. I’m drowning in a deep dark hole of emotions I don’t understand. If I had known how overwhelmingly unbearable this pain would feel, I don’t know if I could have done it. I have always disliked children, never thought of having any of my own until I was pregnant and then everything changed. I wanted to keep it so badly, but I was so afraid and ashamed to admit it to myself and to him. I had always thought he didn’t want children as well. When we found out about the pregnancy, besides asking if I was in shock, the words out of his mouth were about abortion, so I wrongly assumed that’s what he wanted. I never would have guessed that he wanted to keep it. He said it was my choice and that he would support any decision I made. I thought I would be ruining his life had I kept it.

A few weeks afterwards, he told me getting the abortion hurt him more than it could ever hurt me. He was the one that brought abortion up. I never would have considered it if he hadn't.  I was in shock and needed more time. It was a decision we needed to do together but he left it up to me without telling me he wanted to keep it. I felt that since he brought the abortion up first, that's what he truly wanted, and I had no other choice but to get an abortion I didn't want. It would have been wrong of me to force him to be a father that I thought he never wanted to be. No child should have a parent that doesn't want them.

I have to live with this horrible choice I made for the rest of my life. Even though the baby doesn’t exist anymore, its brief existence in my womb changed my life forever. It just hurts so bad to be alive like this. I don’t blame anyone; I did this to myself. It’s my fault; everything is my fault. If that little one didn’t deserve life, neither do I. I have not been eating much lately because I deserve to feel empty. I am a void where things go to die. My baby would have been born sometime in April. I’m going to kill myself then if I don’t do that anytime before. I feel like I deserve to die; all I do is f— up and hurt everyone. Everyday is like a nightmare progressing on.