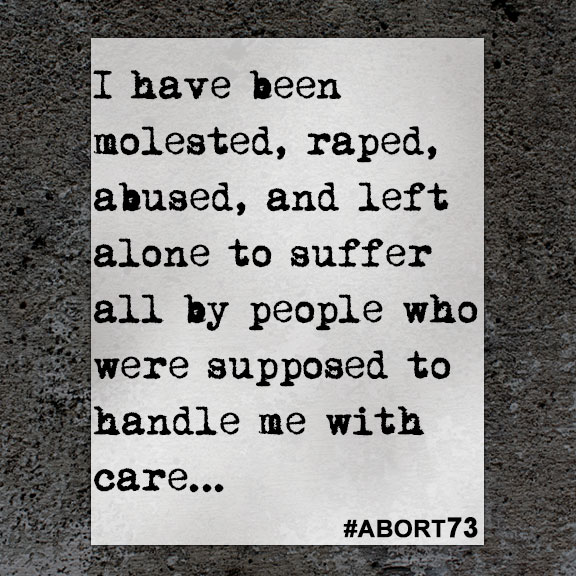 I have been molested, raped, abused, and left alone to suffer all by people who were supposed to handle me with care...

I was a single mother of one in a relationship with a man who was in the process of a divorce. He had two daughters and had lost a child years back. I was on birth control and twice took the PlanB pill, just to be safe. I still ended up getting pregnant. We had agreed, if it were to happen, we'd make the choice together to have an abortion. Two days before we left for our family vacation, three tests were laid out in front of me with positive results—and my mind changed. My heart was excited. I wanted OUR baby. He had convinced me we would try and we would plan for the next one, but that now wasn't the right time for either of us. That it would ruin his life, and mine. He promised me we'd take this decision to our grave and tell everyone the tests came back negative. Then, while in a heated argument, he told my mother and family I was pregnant and going to have an abortion.

My mother pressured me to have an abortion, saying she was not going to help me at all with this baby. I told them both they were right. I told myself they were right. I prayed to God, the Universe, and my deceased brother to forgive me—to hold my baby for me because I wanted her. I felt it was a girl. Every day and night leading up to THE DAY, I talked to her. I begged her to forgive me. He told me he'd be there with me as I went through the abortion. He wasn't. He canceled on me a week before. He didn't call me or even text me the morning I took the first pill. I started hating him that day. The following day came the 16 pills, and the pain. The spotting. The bleeding. He texted me, asked me how I was—as if I had the flu. He said he was "sorry" and that he was "there in spirit.” My mother went away for the weekend. I cried myself to sleep off and on throughout this process. In pain, alone, while my 6-year-old played with his Legos and watched YouTube Kids. My 6-year-old brought me a blanket and pillow to lay down on the couch with my "bellyache." I felt even more hate for this "man.” I was angry with him, with my mother, with myself. Myself. How could I, a grown-ass woman, allow ANYONE to convince me THIS was the right choice.

My God, the pain. I never felt anything like it. I fell asleep, again, woke up feeling like I had to pee. I stood up and felt a gush that I knew wasn't blood. It wasn't a clot. I went into the bathroom, my pad soaked in a liquid—my first born was cesarean so my water never broke—and there in the middle, this almost translucent but kind-of-white thing. It looked like a jellyfish, a tiny piece of jellyfish. I stared at it. Two tiny black dots I knew were her eyes. I saw a part that looked almost like tiny, tiny fingers, so I touched it. Just that part. I cried. Uncontrollable, sobbing, disgust, hurt, anger, fear, hatred and love. Holding my baby that I wanted so badly, in a fucking pad. The clots came, the blood poured out of me, my heart turned cold, my mind went numb. I whispered, "I do love you my precious baby, I am beyond sorry; I will hold you forever.” And I rolled her and the woman I once was up in the pad and gently placed her on the top of my fucking trash can.

I had cravings; peanut butter and bananas. Peanut butter banana smoothies or peanut butter banana milkshakes were SO good. He made sure my cravings were satisfied when we were on vacation. He'd give me a look if I smoked a cigarette. He called it "the baby" and touched my belly while smiling and saying he wanted to see my baby bump. Did his mind change too?? We COULD do this together. We didn't need help from anyone!! BASTARD. That sonofabitch! He knew he didn't want me to keep it. I told everyone that I had a miscarriage. I told them I had decided to keep it without him, but I had miscarried anyway. Now, almost a month later, after ghosting me, he calls me. Tells ME how this decision DID break him but it was easier for him to cover it up than to feel it! I will forever carry this guilt, this regret. I will forever wonder what she'd look like, who’d she favor? Would she have the hair of a white mother or curls of a Puerto Rican father? Would she act more like me or daddy?? Would she resemble her brother or sisters? What would their relationship be like?

I have been molested, raped, abused, and left alone to suffer all by people who were supposed to handle me with care and love and respect. Not strangers—family, or people who were like family. Never in my life have I ever HATED someone, not any of those who brought me harm, as much as I HATE MYSELF. I will NEVER not feel that excruciating pain. I will never untouch the little fingers I touched. I will NEVER UNSEE WHAT I SAW. This will NEVER be undone!

If abortion is something you're considering, PLEASE, I beg of you, woman to woman, mother to mother, please listen to YOU! I wish every day I would have listened to me!!!