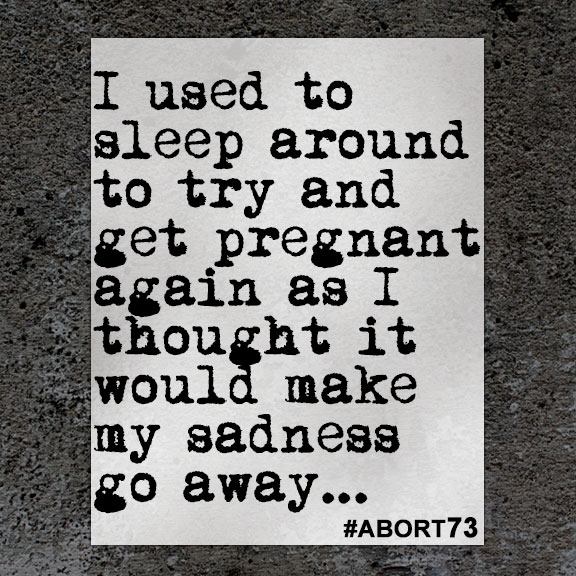 I used to sleep around to try and get pregnant again as I thought it would make my sadness go away...

I had an abortion when I was 17. My boyfriend and I had talked about having a child together, but when I actually got pregnant he told me if I didn't "get rid of it,” he'd break up with me. At the time, that was the last thing I wanted as I thought he was making my life better. I felt pressured by him and my family. I had recently moved to a different city with just my parents and gotten a new job which I was scared about as well. I felt so lonely as I couldn't see my friends or my boyfriend, so I went ahead and had the abortion in October 2018. It was horrible and I've regretted it ever since. I didn't speak to anyone at my work for at least three months after the abortion because I just felt too bad about it. I thought I didn't deserve any friends. I ended up leaving my boyfriend and never talking to him again, but then about eight months later I saw his Facebook page. He was expecting a child with another girl which was honestly heartbreaking. I thought, "why wasn't our child good enough?" I felt so depressed for a long time. I used to sleep around to try and get pregnant again as I thought it would make my sadness go away. Now I've realised how stupid and irresponsible that was. I'm now starting to feel better, but the memories are always there.