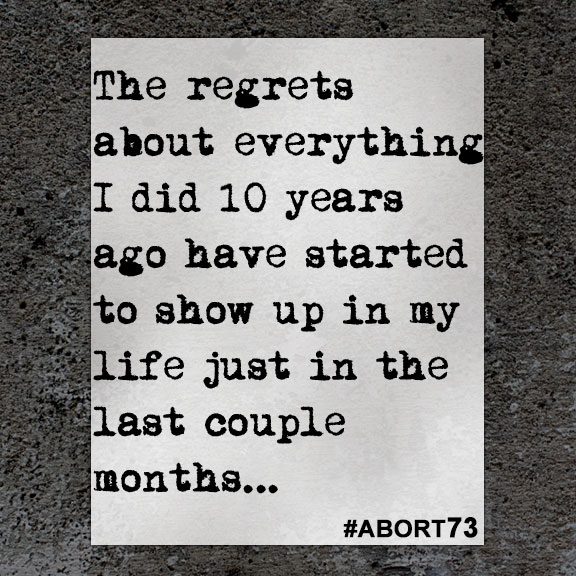 The regrets about everything I did 10 years ago have started to show up in my life just in the last couple months...

For the last several weeks I have been wanting to add my story to a pro-abortion website, but every time I start writing it I realize that I'm really not sure if I am happy with my decision or not. I somehow found this website and felt like I could write my story on here, but I'm really not sure if my story would be posted because I don't have any serious regrets either. I am stuck between the good and the bad about my decision on having an abortion, and if it wasn't for my abortion then I wouldn't have any of these thoughts at all. I could probably go on and on about the pro and con about all of this, but I think when it comes down to it the negative will always win.

What I will say is that having an abortion is easily the most unnatural thing I've ever done.

Just to be in that procedure room was the weirdest sensation I've ever had, and it's one of those sensations where you just want to leave and run, but it was the doctor and the nurse who kept me calm and relaxed and told me that everything would be okay.

And minutes later I could feel the cramping and a suction sensation but just briefly. It was at that moment when I wished that I wasn't there at all and that it was just one bad dream.

Ten minutes later and I was no longer pregnant.

I don't write this to scare anybody; I just write this so that I can get it out of my system. I never ever thought I would have an abortion, and I was raised to believe that abortion was wrong—but for some reason I decided that it was the right choice. I just wasn't ready to be a mother and I wasn't financially stable for anything in life.

I had my abortion when I was 20 years old. I am now 30 years old and I have a 7-year-old son and a 3-year-old daughter. It was July of 2010 when I had my abortion, and it's coming up on the 10-year mark. I'm not sure how I will feel next month, but the regrets about everything I did 10 years ago have started to show up in my life just in the last couple months.

Abortion is not the easy way out. Many people will say that it's no big deal, but here I am 10 years later and I'm still affected by it. It's like this dirty, dark secret that will never ever go away. I have had moments in my life where I have looked at my two children and realized that a third should have been running around with them. But I've also told myself that maybe my two current children wouldn't even exist if I did not have the abortion during my first pregnancy. But doesn't that mean that I am playing God?

If any one of my girlfriends ever come up to me saying that they were thinking about having an abortion I would tell them the exact same thing I just said on here. I would support them in their decision, but I would hope that they wouldn't make the choice that I did.