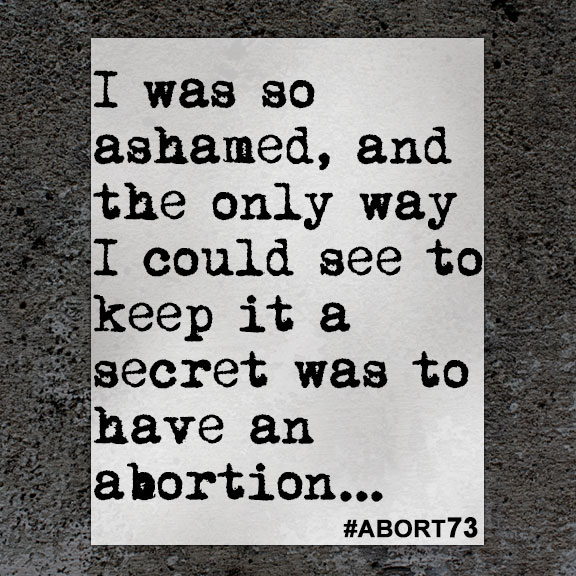 I was so ashamed, and the only way I could see to keep it a secret was to have an abortion...

I grew up in a family where all the relationships were shame-based and everyone had varying degrees of mental illness, but I didn't understand that until recently. I was painfully shy, felt like I didn't fit in, was ashamed to make mistakes, and embarrassed to be me—especially after puberty started. Life's realities and adversities were rarely discussed, especially sexuality, birth control and relationships with the opposite sex. Futures were not discussed or planned. I was extremely naive and immature. I had no idea that sexual experimentation was a normal part of growing up. It never occurred to me to go to the library and educate myself—or visit a doctor or pharmacy. I longed for a loving relationship, someone to share my life with. After college was over, I began to engage in risky sexual behavior to fit in. I thought I was in love with my first sexual encounter. I knew I needed protection, but I went along with not having any. After that relationship fizzled after a few months, I began another relationship. I really wanted to break up after a few months, but didn’t. Since I already had gone all the way with my prior relationship, it never occurred to me to not start having sex in this relationship. Again, I knew I needed protection but had no real idea about how to go about that and relied on my boyfriend for information. I was ashamed of doing what I was doing, but it was fun. Even though he said he loved me, he didn’t. Because if he had, we would have discussed how to handle birth control. So it was very hit or miss on using it. Eventually I got pregnant. I was absolutely shocked and petrified. This wasn't part of how I thought my life should play out. I was 24 and had a full-time job. This was totally embarrassing and humiliating. I thought this only happened to teenage girls. I couldn't tell anybody but eventually told my boyfriend. I was so ashamed, and the only way I could see to keep it a secret was to have an abortion. I knew it was wrong for me, but my need to keep it a secret—and to not admit I made a mistake—was much stronger than being concerned for the embryo. I didn't love my boyfriend, and I thought I would find the love of my life eventually. I needed some better counseling, facts and truths at the appointment, and a few days to digest it all. No one really encouraged me by saying, “You can do this; it happens to millions of women your age.” I just wanted to put myself back to being not pregnant, but it can't be undone. Once I went through with the abortion, I felt no one else was ever going to want me after this. So I stayed with my boyfriend even though he had addictions and no steady employment. I felt like I had to punish myself and eventually married him. Due to complications from the abortion which I didn't understand at the time, I became infertile when I did want to have children. I put myself through many, many treatments to be able to have children. I had major depression and panic attacks, due to my shame and guilt from the abortion. I finally told my mother and felt so stupid for not telling her in the first place. I might have avoided all the trauma if I could have just been brave enough years ago to tell my secret and deal with the consequences of my risky sexual behavior instead of hiding it. I also developed breast cancer and early menopause from all of the fertility treatments. My children mean everything to me and I know I wouldn't have them if I had told my secret early on. It's bittersweet. Mental illness and immaturity need to be identified and treated early in life, and sex, sexuality and birth control need to be discussed.