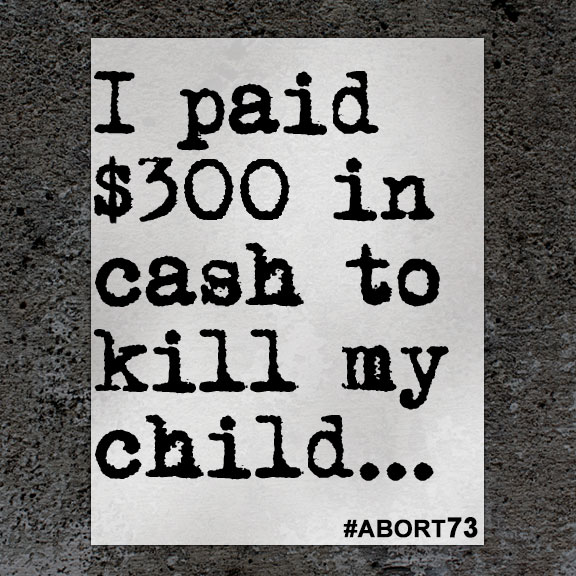 Often we do not hear from women who have "survived" abortions. I get it. There is shame, guilt, fear, condemnation for those who have had abortions. How do I know this for certain? Because when I was 16 I had an abortion and when I was 17 I had my second abortion. The memory I have of being pregnant was fear, a lot of fear! Fear of an unknown future, fear I could not handle a child, fear I would fail, fear of my parents’ response and rejecting me, fear of people staring at me and judging me for being pregnant at such a young age. I believed at the time there was no way I was prepared to have a child, and having a child would interfere with my college plans.

At the time, my church, my pastor, my school, and community never told me there were resources out there to help me—with adoption, abstinence, finances, or help caring for a child. In fact, I never understood the holiness of waiting to have sex until after marriage. Silence is agreement to what is being spoken. And what was spoken? I heard from Planned Parenthood that you could easily "get rid of the embryo”—which is how I interpreted the message. Back then, being with child was an inconvenience, not a blessing. Sad. Such a twisting of truth. And to top it off, my second abortion was a couple years after the "summer of mercy" in Wichita. During this time it was common to see big poster pictures of babies aborted and babies in mother's wombs around the abortion clinics. So, when I went back for my check up from my abortion, people were on the sidewalk yelling “You will go to hell!” along with other judgement and fear-based comments. Sad.

I was raised in the church. I went to private Christian school from kindergarten to 6th grade. I loved Jesus. I knew Jesus loved me. Yet abortion was chosen. Silence kills! Fear kills! Lack of communication and relationship easily brings one to rebellion! I know. I was that child in rebellion—silently. On the outside my life looked good, but I really was not making decisions that lined up with the Lord's way, truth, and life. I was "incorporating" Jesus in my life.

Those screaming judgments did not know me. They did not even try to come alongside me to love me through it. To be fair, I was too scared to ask for help. And to be sure, Planned Parenthood and the abortion clinic I went to definitely did not! They had me sign a piece of paper saying I received counseling. The counseling was simple questions like, “Are you certain you want to have an abortion? Has anyone forced you to have an abortion?" Nobody asked if I would like to talk to someone about alternatives to abortion. I remember the "counselor" said it would be okay and over before I knew it. I paid $300 in cash to kill my child. Sad. Just so sad.

The second abortion was horrible. I felt inside my womb a tearing of something, and it hurt physically. I immediately lived in regret. In recovery at the clinic I was lying on a cot along with other women. There were approximately 15 women in this room, and we were all lined up in multiple rows. We talked about our sadness. We tried the best we could to encourage one another in the very short time we were in recovery. It was like it was "confession" time. Some admitted immediate regret. Others admitted this was their second or third abortion. I remember being shocked that there were women there of ALL ages and strangely comforted that I was not the only one out there deciding to abort.

My heart was hard. To survive the decision to kill a child I learned to justify that it was only an embryo and that I was better off and could always have another child "when the time is right.” Did anyone counsel me regarding grief or what my body would go through related to hormones, etc. after it was no longer with child? No. Years later when I was asked at my medical doctor's office if I had children in the past, I answered yes—two—who were aborted. My doctor then refused to be my doctor for her own conscience’s sake. In one aspect, I understand her decision. But I had so hoped someone would have been willing to walk along side my messy and horrible decision. Such rejection when I already felt rejected.

I remember asking why I was so sad because everyone told me it was going to be so much better after the abortion—the people at the clinic and in the pamphlets. I spiraled into a deep depression for years. I numbed the pain through alcohol and in other not-so-healthy ways. I feared getting pregnant again and visited Planned Parenthood to get free birth control. Then I feared having sex at all.

Today I partner with Embrace as a prayer partner. What an amazing non-profit Embrace is!! There are other organizations that help with adoption and Embrace is so well connected in the community to help women and men, whether they are deciding upon life or death or already chosen life or death, Embrace will meet them with grace, love and mercy. IF ONLY I had known about similar organizations when I was a teenager.  Sadly, today, I am still not ready to make my abortion story public. Largely because my family and husband —he was my boyfriend at the time of the abortions—are not ready. Still soooo much shame. I keep telling them the only way to annihilate the shame is to speak truth and be vulnerable. In God's time they will be ready some day.

Abortion is NOT freedom! Abortion is making "peace" with death and that is an absolute lie and brings so much destruction to a person's life that goes beyond the mother. I have lived through this lie and now stand on the other side with hope!