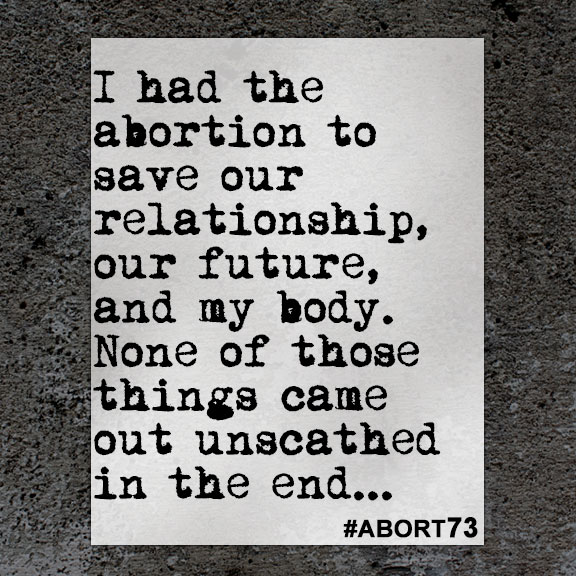 I had the abortion to save our relationship, our future, and my body. None of those things came out unscathed in the end...

I had an abortion for many reasons—justifications, I now feel. I was 18 and had a few months of high school still left. My boyfriend and I felt like we were in love with each other, but we'd only been together three months. Once I was pregnant and knew how scared he was, I questioned inwardly whether he'd stick around if I kept the baby, and was too insecure to ask him about that option. I said from the beginning that I wanted to abort, and he only ever said he would do whatever I wanted to. I let myself believe that meant he really loved me, but really, I can admit that he hoped I'd follow through on killing it—and that he was trying to make it look like he supported me. But in actuality, I'll never know if he would have stepped up to be a father, because I never felt brave enough to discuss the option with him. We stayed together for almost two years following the abortion, but like most post-abortive couples—and most high school couples, too—we did not last, despite all the love we'd thought we had. I had the abortion to save our relationship, our future, and my body. None of those things came out unscathed in the end. Abortion has proven over the last 12 years to have not been the answer to my unwanted pregnancy. When my parents tried to talk me out of abortion, they only suggested adoption. I unwittingly stated I wouldn't be able to give it away if I gave birth—the same as saying, "I love it too much to give it a chance at life." Makes no sense now, but I was ignorant. And my parents did not suggest I could raise the baby myself. Adoption was the only option ever offered me during my decision process. I was steadfast on having an abortion, having no idea of the negative ramifications it can hold. So with not a single aware person in my life giving me hope for my child, I as a young person felt I had no other choice. Other selfish reasons I chose abortion: I didn't want to give up my youthful body, and I didn't want to be seen as a slutty unmarried teen mom.

The abortion happened on June 15th, 2007. I was so sad to have to do it, and yet denied for years afterwards that it had been a bad decision overall. No matter what justification I've come up with over time, and no matter how pro-choice I've always been, and no matter how relieved I've been to not be a mom until the time is "right," the abortion experience has nagged at me every day in some way since. It has meant very little how much I want to just move on with my life. I don't think about it all the time, but I wish I didn't have to remember it at all—I mean, part of the point was TO forget about it, and I don't have that! I am not in control of all the ways it affects me. At times, I suddenly feel uncomfortable and sick to my stomach because of my thoughts concerning it. Not often, but it always sucks when it happens, and I'm always reminded in those moments that I wouldn't be revisiting this trauma if I'd never let the abortion happen in the first place. I have attended a post-abortive recovery program this year and it has helped me heal greatly, but alas—once you face so many facts and finally properly grieve your baby, your baby has become very real to you as a person, and part of your healing is some more pain. I get better at handling it as the days go by. But the grieving doesn't really end completely, just like parents who lose a kid that they actually gave birth to, and just like I was before I took the healing program. The life event of abortion does not cease to exist no matter how wise and peaceful you become, and it will affect you. It's livable, and I'm glad for my life, but certainly I want to impart to others that abortion is best off avoided!!!