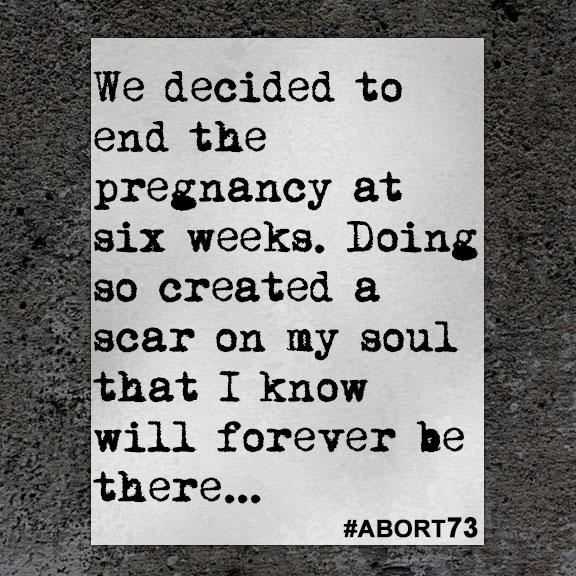 We decided to end the pregnancy at six weeks. Doing so created a scar on my soul that I know will forever be there...

I know I want a baby. I’ve known I wanted to be a mom for as long as I’ve known that I need to write. As every young girl fantasizes about the different paths her future will take, my dreams have been extravagant and varied. But I’ve always kept one picture that remained clear among the blurry transitions from one milestone to the next. That picture involved a cozy room with the faded colors of a coastal town filling the walls, myself in an overstuffed chair with my laptop and a cup of coffee, and a polished wood crib where my baby finally, and fitfully, succumbed to her afternoon nap. I would catch whatever hours I could to work on my novel, and in a few hours the man who I’d fallen in love with enough to share this child who would keep us awake more often than let us sleep, would be home from work and we’d fill each other in on all our personal dramas of a day.

I’ve spent seven years as a full time nanny, caring for little ones who I held as newborns, then sent off to preschool. I’ve had pumped and bottled breast milk vomited down the front of my shirt, little hands with nails sharper than a shark’s tooth grab my neck and claw away during a tantrum, the relentless screaming of a child who doesn’t want to be buckled in the carseat ringing in my ear for what feels like a decade. I’ve gotten to experience all the exhaustion-filled moments of children. But never has that made me question my purpose of wanting without a doubt to be a mother one day. Even if I struggled to conceive, I understood I would be completely accepting of adopting. I could just as easily love a child I didn’t create, and wanted to watch my family grow into a chaotic and fun mess as the years went by.

Sixteen hours ago, I had an abortion.

As a twenty-seven year old woman living in her own two bedroom, large-backyard house, driving a Lexus SUV—I had an abortion.

That man, who I knew immediately was someone special, and someone my soul recognized, was back on the other side of the country. Back to his work, his friends, and his already established life.

I was back to being a full-time employee, a full-time student—only a few semesters away from starting graduate school, and a full-time dog mom. And all of the sudden everything I’d ever wanted was part of me. Growing inside of me and from the second I took a positive pregnancy test I loved what it was.

The man and I talked, and his initial response was “let’s figure it out.”

But fuck, that’s hard. I had no health insurance. We spent one week together. My job, house, life, all of it—on the other side of the country from him. I don’t qualify for state help with my income, and signing up for private insurance was out of the question with it no longer being open enrollment. Already, our only option to avoid paying tens of thousands of dollars in medical bills was for us to get married, or me to quit my job in order to get state help. Both unfair options.

We spent weeks discussing it all. And our hearts broke when we realized this was going to be really hard, and probably destroy one of our futures.

It wasn’t the baby’s fault. We would have loved every inch of that baby. I am pro-choice, I believe it is up to a woman to decide if she wants to end a pregnancy. But I never thought I would make that decision.

After taking about nothing else but the baby, after talking to our families, our friends, and falling apart on the phone a few dozen times, we decided to end the pregnancy at six weeks. Doing so created a scar on my soul that I know will forever be there.

But, I don’t regret it. My heart can break for the child I didn’t keep, just as my heart can find gratitude in the chance I gave myself to continue the life I’ve worked so hard for. My heart can feel peace at knowing the man that made me laugh, made me think, and made me starry eyed, didn’t have to give up his career for a more lucrative one, or give up his sanity trying to travel across the country monthly to visit a baby he couldn’t not be part of.

I think I fell in love with the man whom I created a baby with while we worked through what to do together. His patience and logic gave me what I couldn’t give myself.

And then, I as the emotional pain wrapped me into a depression unlike anything I’ve experienced, the physical pain of an induced miscarriage reminded me of what I was putting my body through.

Twenty-four hours after taking a medication that made me feel nauseous, tired, but relatively okay, I took a dose of the second medication—four pills—and within twenty minutes I felt cramping unlike anything I’d experienced. Over the next hour and a half my body shook violently, I went from a bath to the toilet where I passed what seemed like a scary amount of blood, and then I fell asleep at 11:00 PM in preparation for my 6:00 AM alarm—even during an induced miscarriage, my days couldn’t stop.

I fell asleep with protection for the bleeding, and woke up realizing I’d severely underestimated what would happen. I quite literally woke up in a pool of my own blood.

And I cried. My dog licked my face, neck, hands—laid with me and loved me. I sobbed.

Then I showered, threw everything on my bed in the laundry room, got dressed and went to work.

Sixteen hours later, and now I’m trying to figure out how to get the blood out of my mattress, trying to go over what I need to finish for homework, and trying to process the fact that I chose to terminate a life that I would have loved more than my own.