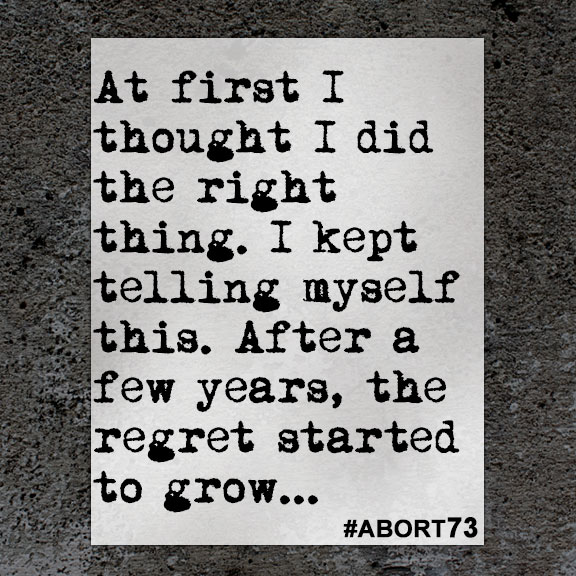 At first I thought I did the right thing. I kept telling myself this. After a few years, the regret started to grow...

When I was 16, I was a very troubled teenager. Doing drugs, partying a lot, hanging with the wrong kind of people. I was having this relationship with a boy, but I knew it wasn't going to last. Then I found out that I was pregnant. I told my parents and my boyfriend. My parents were like, “you are screwing up your life,” etc. But they said, “whatever you choose, we are standing behind you.” Still I felt that they actually wanted me to get rid of it. I also thought I couldn't raise a child. I wouldn't be a good mom. I was a child myself, with a lot of problems. I thought the child would be better off not being born in this life. At first I thought I did the right thing. I kept telling myself this. After a few years, the regret started to grow. I heard women talk about how their abortions were like nothing. It made me feel sick. I saw women with their children and felt guilty, sad, and hurt. The huge hole in my heart kept growing. Then I had a relationship, not a very good one. He was very aggressive. He said he wanted a child with me. My stupid thought was that a child would make everything right again. We tried, but I didn't get pregnant. I don't believe in God, but I felt like I couldn't get pregnant anymore as some kind of punishment. I started to think this way, and it made me hate myself even more. I gave up my only chance to be a mother. I fled from my boyfriend to the other side of the country. I wanted to die. I felt so alone and hurt.

Then I found out I was pregnant again. I was scared and worried but never so happy. My situation was really bad, but I could never go through an abortion again. I was so scared the whole pregnancy because I still felt like I was going to lose it as a punishment. I didn't dare to wear black underwear, so I could see if there was blood. Everything I felt made me panic. Luckily, the pregnancy went great. I loved being pregnant, even if I was scared. The feeling of life in me made me feel love again and not so lonely. The birth started good but ended in an emergency C-section. I went trough 24 hours of contractions till I got to 10 cm. Only I didn't get to push. The doctor saw my son wasn't doing well, so they started the emergency C-section. I was so so scared. I went trough hell; that's what it felt like. My son was born, and I waited to hear him scream or for them to give him to me. But there was nothing. My mother was called to the other room and came back crying with my phone. She showed me pictures of my son getting oxygen through a mask. I thought he was dead. The nurses didn't say anything. I thought to myself: “you see, I am getting punished.” They gave me the joy of having a child, make me feel happy again, just to take it away from me at last the moment. At that moment, I thought “just let me die”. I kept passing out and kinda just gave it up. Then I had to go to the recovery room. Still not knowing if my son was alive. Still feeling like I was getting punished, tired, hating myself. I kept crying and was shivering from everything.

Luckily my son ended up doing fine. He stayed on oxygen for three days more and a week-and-a-half later he came finally home. I wouldn't have survived it if my son died that day. I also believe that I wouldn't live if I didn't got pregnant. In the end, having a child made my life better, only in a whole other way. He came at the right moment. He saved me. I quit drugs, drinking, smoking, dumped my ex, went back to school, and I have my own home. That's why I named him Daylano. It means light in the dark. I love to see him grow and everything, but I keep thinking about my other child. If it would be a girl or a boy. How old it would be right now, how it would look. He or she is always in my mind. Keep telling myself it was the right thing to do, but I am not so sure anymore. There will always be a hole in my heart where it should have be in. I really want to get a tattoo, so he/she will always be a part of me. I just hope one day I will meet him/her.

I don’t want other girls to have to go through this. People need to know what the impact of abortion can be.