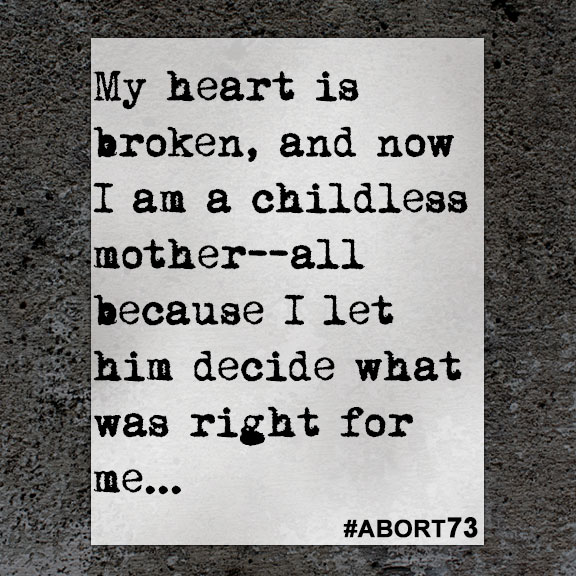 My heart is broken, and now I am a childless mother—all because I let him decide what was right for me...

He was a one-night stand; I had no feelings for him. We are young, dumb, and in college. I’ve been on birth control for two years and had an IUD in before that and never had any issues—just living my young and reckless life. I was having fun one night with my friends and went over to one of their apartments. I knew all the boys who lived there and just “rallied” with them as it was the first week back to college and in our new apartments. We were hanging out, and one of the boys (let’s call him JJ) invites me up to his room. I was quite familiar with JJ. He dates one of my old friends, sent me a few late night texts throughout the summer, and I knew about his excessive drug and alcohol use. JJ and I hung out that night. He made a move, and I didn’t stop it. We didn’t get far, but the next night we went all the way. I never was really one to hook up, but in the moment I couldn’t find a reason to say no. We didn’t really talk much after. I’d go over to his place to hang out with our mutual friends. We’d laugh and have a few-word conversation, but nothing more than before we hooked up. I watched him bring multiple girls in and out and it never bothered me. I had no attachment to him.

The weeks went by and the signs started to sprout. I put on a few pounds, which I thought was just college fat. I was constantly queasy and didn’t get my period. Instantly, all my closest friends knew. Just how I looked and acted, they knew. I made an appointment to see a local OB/GYN for the upcoming Monday. The weekend felt long and I wasn’t worried because I really doubted it could happen to me. I’m on the pill; I can’t get pregnant. Boy was I wrong. I was taken back, pee and blood tested, and from the pee test they knew I was pregnant. They did an ultrasound, and I was just in disbelief. I was mortified, and hungry at the same time, and I felt like everything I was doing for myself was crashing and burning. I knew I had to tell JJ. I talked to my two best friends, and they hid in a nearby room in case he didn’t take the news well.

I texted him, asking if we could talk in person. Being the charmer he is, he replied with, “what is it? I have shit to do.” I walked into the apartment and up the stairs to his room, trying to keep myself composed. He looked at me bothered and said, “I have stuff to do, so can you hurry.” I said to him, “I don’t know how to say it so, like, I’m pregnant, and I’m sorry.” Instantly he slammed the pencil that he had and cursed. I started to tear up, and he said to me, “can you please have an abortion?” I knew how he’d react. I knew it, and I just nodded my head as he went on about how we can’t do this and I “HAVE” to have an abortion.

I made an appointment for two days later (Wednesday), and he kept pressuring me, to make sure I was going to go. Come Tuesday, he posted a photo that absolutely sent me over the edge. It was a baby doll with a knife. I went off. He apologized over and over, saying it’s not what he meant, and instantly I knew I couldn’t do it. I knew that it was a mistake. I told him, and he did not take it well. He showed up to my place to talk and kept saying I had to “get rid of it,” and I kept asking him to stop saying that. After arguing for an hour, I said to him, “Please don’t make me do this,“ but he kept saying we had to and we’re not ready to be parents. I was talked into it. The week went on, and I was very back and forth—to the point where I pushed the appointment to the following Monday. I just needed time. We shared texts, and I told him I didn’t know if I can go through with it. He basically told me if I had it that he wanted no part in the baby’s life—(what a real Prince Charming. I fought so hard to keep this baby, but I felt like I’d be cheating a child of a good life by giving it one with a single teen mom. JJ didn’t talk to me at all from Friday through Sunday, and the final consensus was I was having an abortion on Monday at 9 am. He told me he’d be there for me after. He said I wouldn’t be alone. But while I was sitting home alone all weekend crying, he was out at a music festival—having fun and living his life.

Come Monday, I went to the clinic. Alone, scared, and feeling like garbage. I cried to whole time. I was not too far along, so I had the abortion pill which was better than women who have to have a surgical procedure, but for me this was the worst climb of my life. I felt instant remorse. He never reached out. He knew when I was going and how I felt and nothing. I let him know he was off the hook and he said, “ok. good.” And that night—which is tonight—at this very moment I am writing, he is getting piss drunk while I’m crying, bleeding, and regretting what I did. I made it clear a few days back that I could’ve done this alone. I don’t need him, and I would have been a great mom. But now I’ll never know. And I’ll never have my baby because he or she is now in heaven. My due date was supposed to be June 4th and I feel it now. The days leading up there are only going to get harder. I know in my heart that if I could go back to 15 hours ago, I would. I wouldn’t have the abortion. My heart is broken, and now I am a childless mother—all because I let him decide what was right for me.