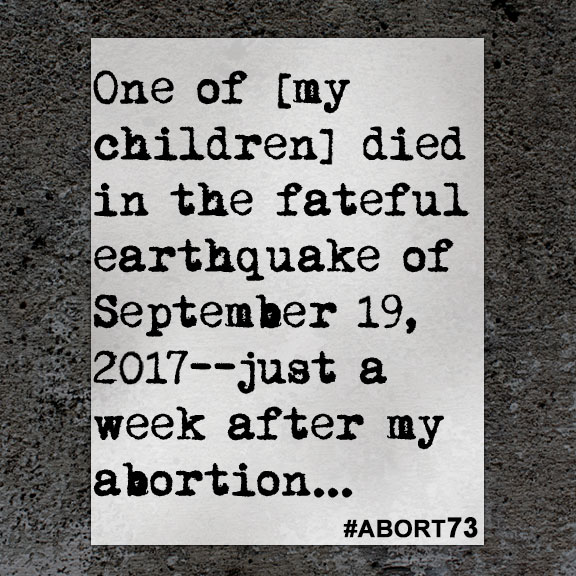 One of [my children] died in the fateful earthquake of September 19, 2017—just a week after my abortion...

No intention to justify myself, but back at the time I was 35—recently divorced, and I had three children to look out for, so the news that I was pregnant with my ex-husband terrified me. At the start, I hadn't considered to abort, but a friend of mine easily convinced me a couple weeks after finding out. She even got an appointment for me. The reason why I agreed was because—as I said—I was terrified, but I was terrified because I've been the one that brings my children forward all their lives, as their father was a negligent nefarious man. He died in a car accident earlier this year. I could barely make ends meet with my decent job and three kids. Also, I wasn't emotionally well enough to have and raise a new child. I can't recall much of the operation. I mean, it hurt, and I felt pretty bad the next day, but I heard from friends that, "that's ok, that's what happens after an abortion.” So it didn't worry me much. But my indifference wouldn't last. Going back a little to the beginning, I said I “had” three children because one of them died in the fateful earthquake of September 19, 2017—just a week after my abortion—while he was attending school. The building collapsed; he was only 7 years old, and it was his first year of elementary school. Ever since, a lot of things have gone through my mind—among them, the regret of my actions and the frequent thought of both my dead son and my unborn child, the one I didn't let live. I have much sorrow.