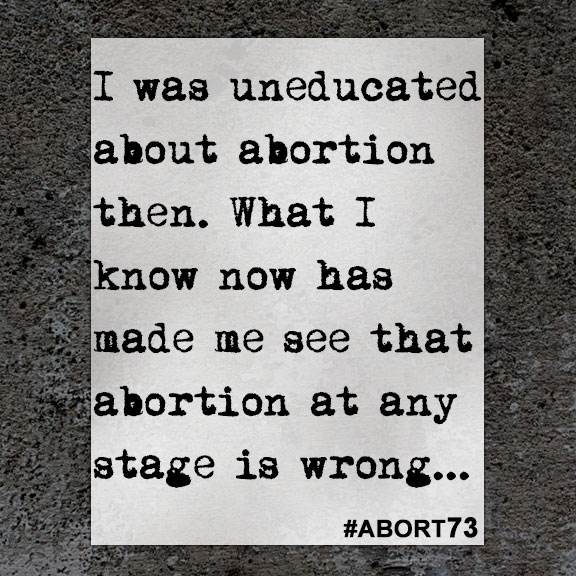 I was uneducated about abortion then. What I know now has made me see that abortion at any stage is wrong...

It was mid December 2016; I had just given birth to my first child in September. I had just turned 20 in October. My husband and I live with our 3-month-old son in my mom and stepdad's house. I had only gotten one period so far and was taking the "mini pill,” but I was horrible about taking it because I was adjusting to new parenthood and lacking sleep severely. I remember the feeling I had when I took the test for my son. I didn't know what we were gonna do, but I felt happy about it—excited. I knew everything would be okay and we'd figure it out. But this time, I didn't have to take a test before I knew I was pregnant again. The symptoms I had early on with my son's pregnancy were messing with my breast feeding and I took a test, praying that it would be negative. But it was positive, and I thought, "This can't be happening.”

I love being a parent and felt very conflicted about the positive test. Somewhere inside me was that same feeling, we would make it work because we have to. But I thought of my son, and how the baby would be born right before his very first birthday. I knew it wasn't a good enough reason though, and so it ate away at me. But then I told my mom about it, and her reaction was that I needed to get an abortion as quickly as possible before it's too late. I think she was motivated by the fact that we weren't supposed to live with her permanently. And she knew if we had another baby, we'd take longer to leave. And of course, I couldn’t work because day care in the bay area is more expensive than minimum wage would provide. My husband had a meager $2000/month salary but had understanding bosses that were very helpful at certain times, and demanding at others. My husband pushed for the abortion too. I was the only one who was questioning it. I knew that if I had this baby that I would love it as much as my son. I knew that despite pushing for the abortion, my husband would have loved that child unconditionally had I continued the pregnancy. He was afraid; he was our provider. My mom gave us a roof over our heads, but we bought all our own food, baby supplies, and personal items. And he wasn't really that pushy. It was my mom who would ask me every day, multiple times a day, did you make the appointment yet? You want me to make it? Are you on top of that? And I felt conflicted about it the whole time. And I felt terrible about it. But I knew that we were already struggling with money and would struggle even more with a one year old AND a newborn. So while I think abortion is wrong, I thought it was the right choice at the time. (But) I was uneducated about abortion then. What I know now has made me see that abortion at any stage is wrong.