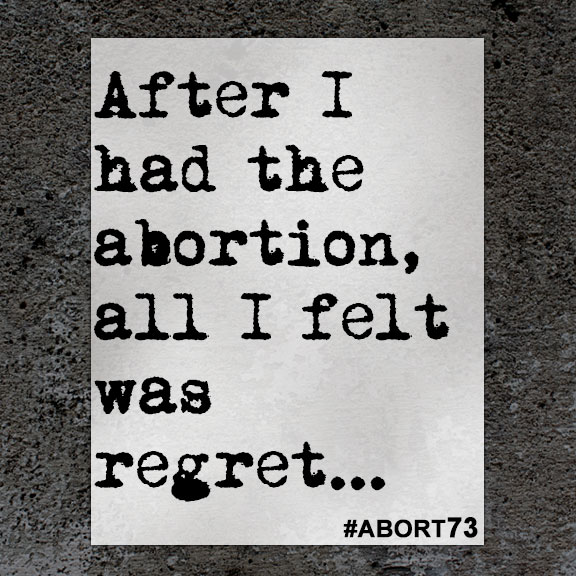 After I had the abortion, all I felt was regret....

I was 20 years old, and I had a gut feeling that I was pregnant again. I was sleeping all the time and felt so tired. My first-born daughter was barely 18 months when I decided to take a pregnancy test. It came out positive. The first thing I did was call Planned Parenthood. I felt numb. I felt nothing at all during the whole process of the abortion. I did not know if I was in shock because I absolutely felt nothing at all. I felt like the abortion was the right thing to do because my 18-month-old daughter is a handful. I also live with my parents, who also house my sister, her boyfriend, and her baby. My sister was also 6-months pregnant when I found out. They are a complete wreck. They do not clean, eat my baby’s food, and fight all the time. My mom is the only person who finances my daughter, myself, my sister, and her daughter. With a baby already on the way, I didn’t want to stress out my mother. She works long hours at work and home. I didn’t want her to pay triple the formula, diapers, and wipes all by herself. After I had the abortion, all I felt was regret. Every single day I took my birth control pills, I was reminded of what I had done. When I told my daughter, “I love you,” I felt ashamed as if the other baby would say, “Why me? Why did you choose to not have me? Why did you not love me?”  Now, I don’t ever want to have any more children. I did the abortion entirely by myself. All I wanted was a mother’s hug and support. When I told her, I was immediately criticized and told that I was going to hell. I regret it every single day. But at the time, it felt like it was the right decision.