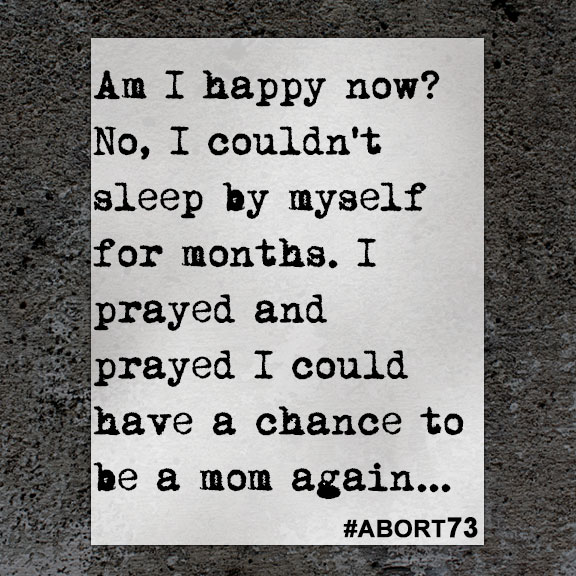 Am I happy now? No, I couldn’t sleep by myself for months. I prayed and prayed I could have a chance to be a mom again...

I’m 22 years old; I’ve had two abortions. I first found out I was pregnant at 16 years old, and I really didn’t even know with who because I was sleeping around so much. It was right after a really bad breakup, and I was trying just about anything to feel better about it, but it didn’t work. I decided to take some time to myself, then one day I couldn’t remember if I had my period. It wasn’t easy for me to just leave my house and buy a pregnancy test. My mom was super strict and I didn’t have any money, so I let another month pass. I finally asked one of the guys I’d slept with to bring me a pregnancy test. I also asked him to bring me ice cream and Gatorade and candy. I should have had a good clue right then and there that I was pregnant. I took the test, it came out positive, and I had to get ready for school. I skipped two blocks to cry. I already knew what I wanted to do because I wasn’t ready for a baby at all, and I knew my mom was gonna decide the same thing. I called one of the guys—the only one that was older, he was like 21. I’m pretty sure it wasn’t his, because he wore a condom [but] he was dumb anyways. He shouldn’t have been sleeping with a 16 year old, so it is what it is. I called him and he said he would give me money for the abortion because he’d been through it before. So I got home and talked to my neighbor. She was a young mother, so I felt like she understood me better, and she told me to talk to my mom. I then did so in front of my neighbor. My mom was so disappointed and mostly upset because I confided in someone else before her, but she was so hard on me so how could I not?

We planned [the abortion]. We went, and I was sure of my decision. They gave me ultrasounds and told me I was three months pregnant. They gave me counseling before I got in a room with a bunch of ladies who have had 4+ abortions. I chose to be asleep. You gotta be crazy to see them doing all that and just watch. When I woke up, I was crying from the anesthesia. My stomach felt a lot lighter, and my parents took me home. They were very supportive, and I was just a little shaken up, but I was young. I felt really bad about taking a life, but I wasn’t ready for it. If I can be honest, I didn’t know the value of life then like I do now. I was young and I didn’t have any emotional connection to anyone, but I can say that baby came when I needed love the most, so I understand God’s plan is always on time. I just feel bad I didn’t let myself trust it.

A month after my first abortion I met the love of my life. We dated for about a year, broke up for like two months, and in that time he got someone pregnant. I kinda felt like that was my karma for taking a life before, and I really blamed myself. About a year later, I slowly found my way back towards him. Don’t judge; nobody’s perfect, and neither was I. We dated again for six months. Everything was great. [But] one day I checked his phone and decided to go through the messages he had before we started dating again, and I found out about one of the girls he had slept with before and he didn’t tell me about her. So I was raging, plus he was talking about me. I just felt super betrayed. A few days later I took a pregnancy test, and it came out positive. I flipped out and told him I wasn’t keeping it. He said he would take care of it, so I should keep it. He was supportive; he even texted me telling me he loved me and was grateful I was carrying his child and that he was sorry and all this stuff. But I ignored him.

Time went by because I was hesitant on a decision. I loved this guy and I wasn’t sure if he loved me anymore. I was 8 weeks, and I saw the first ultrasound. It moved, and It was the cutest thing ever. I started picturing what he would look like, and I picked out names. My sister and mom were really happy. My dad was in jail, but he was super excited too. They all loved the guy as well because we were all so close, but I was so upset because I couldn’t make up my mind. When I was upset, my mom would put her input in and tell me not to have an abortion, but I really just hated her for saying that because she was okay with an abortion when I was 16. But because it’s with this guy, she doesn’t want me to abort and isn’t understanding me and how I didn’t want a split-parent home. I mean, I was just an emotional wreck. I wanted to kill myself, and I had nightmares constantly. Then I would think of good things and wherever I walked to, I would talk to the baby. I would apologize for my thoughts and tell him I loved him, but I just couldn’t handle it—the co-parenting thing and the embarrassment of it all. And he already has a baby, but he’s not in that child’s life because the girl has a boyfriend and doesn’t want him involved. And the guy who I was pregnant with didn’t really care much about her, so I was going to be a second baby momma. Plus, everything was falling into place with a job I applied to years ago, and I started getting acting gigs, and it just seemed like things were going great and this was gonna get in the way.

I tried to visit my dad and have him hear me out, but he refused. He wasn’t gonna support me having an abortion, so I didn’t wanna talk to him and I left visitation. I mean honestly I just wanted someone to listen to me, but he couldn’t even do that. I could have changed my mind if he would have just listened to me because I was so depressed. I felt like they were picking the guy over me—like they never cared about me. My aunts in Mexico called me and said they loved me and whatever I did, they just wanted me to be okay. I cried because finally someone cared enough to support me and that’s all I wanted. I had my best friend at the time, but she was always drinking and had a life of her own, so she was supportive but not the best to take advice from. I just felt alone. I finally got my first pay check from that new job, and we decided to go (for the abortion). I prayed for a reason not to go, and the clinic said they were closed for the day. My sister thought I went and came home crying until she saw I was still in my room and they were so happy, then here it goes when I break their hearts, and my own heart,

The next day I went back. My best friend was kinda tipsy, and I was just hesitant. I was hoping the woman in the clinic doing the counseling would talk to me, but she was in a rush. They didn’t show me ultrasounds, and I was about 14 weeks now. I wanted to text the guy I was pregnant with because I knew he would try to stop me, but my pride was just getting the best of me. I even wanted my best friend to say something, but nothing. They gave me dilating pills and I took a nap in the waiting room they had. I had a nightmare that my teeth fell out. In my dream, I ran to the doctor and told him I wanted to leave and he let me. When I woke up, they were taking me to the bed to get it done and I started pouring my eyes out and told them I wanted to leave. They said I couldn’t leave because the process had already started when I took the dilating pills. If I left, it would be 50/50 that I would miscarry. I wanted to take the 50% chance because I just didn’t wanna go through with it. I cried and cried and the nurses even looked heartbroken, but not the doctor doing it. I didn’t care about the money I paid. I wanted out, but I laid back down because I didn’t have a choice. When I woke up, I was just heartbroken. I got home and I felt empty. I bought a onesie for him and cried in my room for hours, staring at his ultrasounds and just crying my eyes out.

My mom got home and cried her eyes out. She wouldn’t talk to me. I fell asleep and woke up to hear my sister crying too. I was hurt that I hurt them that way I texted the guy and told him I made a mistake. He called me, and I cried and cried. He came to my house—an hour and a half drive—and hugged me the whole night. It seemed like all that anger I had towards him disappeared. How could I do this? I loved him and I loved our baby, but do I have that right to say that? He was with me every day, even though I signed a paper to kill our child, and he comforted me and made sure I was okay. I just couldn’t hold any anger towards him. I loved him, and I didn’t wanna not have him in my life. I know from anyone’s point of view this is toxic, but he became my best friend shortly after, not just a boyfriend. We apologized and reasoned with one another. I couldn’t go back to work because I would think, is this really what I chose over my baby? Am I happy now? No, I couldn’t sleep by myself for months. I prayed and prayed I could have a chance to be a mom again with the person I loved. I regret what I did, and I keep the baby deep in my heart and think about it every day. I hope everyone who reads this just knows, if you’re hesitant, it’s for a reason.