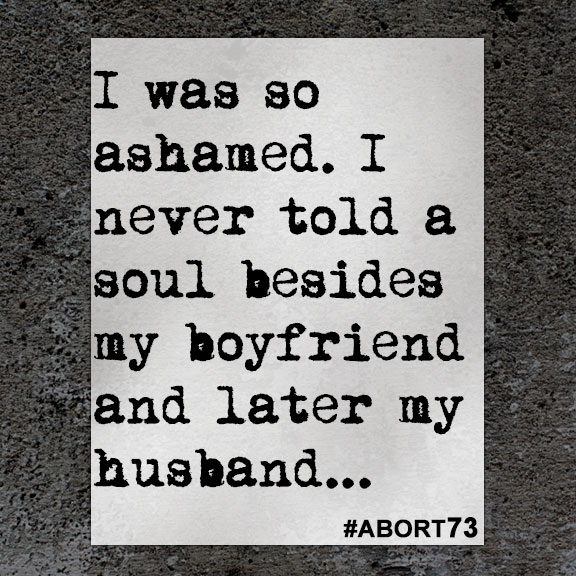 I was so ashamed. I never told a soul besides my boyfriend and later my husband...

I was a senior at a Christian college. It was February 1989, three months before I was to graduate, when I found out I was pregnant. I was 14-weeks pregnant, and I couldn’t walk across the stage at commencement pregnant. Actually, I would have been kicked out of school long before graduation day had I started showing. I ended up having an abortion, which was a two-day procedure since I was already in my second semester. At that time it was considered late-term. The first day was uncomfortable because they inserted ‘seaweed sticks’ into my cervix to cause it to expand so they could get the forceps in to perform the abortion. The next day I went back, and it was a very quick procedure. I was so ashamed. I never told a soul besides my boyfriend and later my husband. I asked God to forgive me and promised I’d never do it again, and I didn’t. However, every day as I drove to work I saw a billboard that read ‘Abortion stops a beating heart.’  It tore at my heart daily. I changed jobs and didn’t see that sign anymore. I placed my feelings/emotions/experience in a little ‘box’ and tucked it away. But it’s still there. I look forward to the day I’ll meet that sweet little life I snuffed out, along with another life from a miscarriage. God did, however, bless me with four handsome sons. I want to do what I can to stop other young ladies from making the same mistake I did.