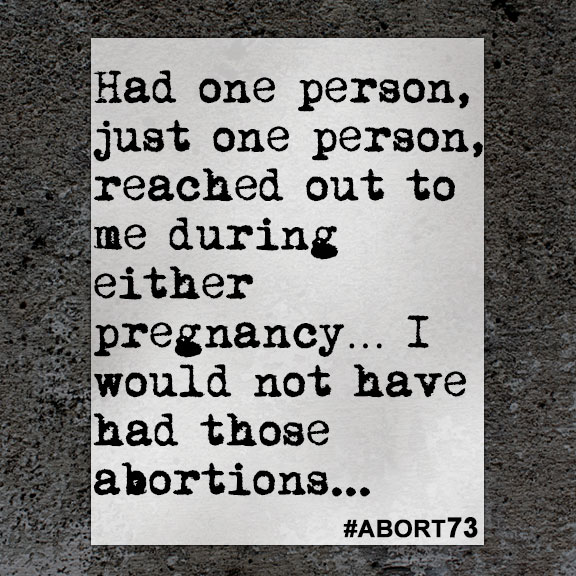 Had one person, just one person, reached out to me during either pregnancy… I would not have had those abortions...

I've been a Christian most of my life, and still had two abortions. The first was after I marched in front of the White House against abortion with my dad when I was 15. When I got pregnant at 18, my boyfriend wanted no part of a child—and I was deathly sick from the pregnancy, vomiting 24/7 for days resulting in several trips to the hospital. As I drove around at night, down the dark, winding, country roads near my home, I would sob from the fear, isolation, confusion and feeling of abandonment. I didn't cry out to God because I couldn't face him, or trust he would, or could, tell me what to do. I was alone, and only wanted the nightmare to end. I was too ashamed and afraid to tell my parents. The lying was worse than the shame. My mom was pregnant with my brother at the time—I’d have a child his age right now—and having a difficult pregnancy. I didn't want to bring her further stress or grief. When I decided to terminate the pregnancy at two months, I wasn't thinking about God or what he would think of my decision. I wasn't even thinking about the reality, or finality of my decision. I just wanted to go to the clinic and end my suffering. On the day of the abortion, the doctor met with me briefly. I was well aware of the procedures, having been actively pro-life, and asked him not to tell me what he was going to do. He nodded in silence. A few minutes later, I was ushered into a cold, dark room and sedated, vaguely aware of what was happening. When it was over, the doctor leaned down near my face and said, "I'm sorry if I hurt you, Christine." He walked out and my boyfriend came in the room. I heard him go in the bathroom and a few seconds later he yelled the Lord's name in vain. They had dumped everything that came out of me in the garbage.

I felt remorse for a few months afterwards. I did cry when I was alone, but never fully grasped the scope of what I had done. I couldn't let myself go that deep. It was easier to block it all out. And that's what I did for decades. In my mind I was despised by God for being such a hypocrite. Consequently, I despised myself, and ran from him for years.

Ten years ago, as far away from the Lord as I've ever felt, and at the end of a bad marriage, I got pregnant again—by the man I was having an affair with. Again, I was so afraid and ashamed. I told no one. To this day, I've never told anyone, but you. The man offered to marry me, and I explained that, as we both knew, I was already married. At 5-weeks pregnant, I had another abortion. The price had gone up significantly from $150 for the first to $500 for the second. He was good enough to pay half. I was crying while I waited on the table for the doctor to come in the room, much brighter than the last room. After I was sedated again, the "nurse" said to me, "If it makes you feel any better, you're only 5 weeks; there's nothing there but a tiny cell," and she showed me the size with her fingers. It was no comfort, and I was already removing myself mentally and emotionally from the situation. The doctor—if she was a doctor—never met with me at all prior to the procedure. She never said a word to me before, during, or after.

Again, I blocked it out of my mind. I had no choice. To face it, to really think about the two babies I murdered, the two children I could have in my life today, the love I missed out on, would have been too much for me to bear. And I didn't even know at that point that a baby had a heartbeat by six weeks and could feel pain by eight weeks.

Four years ago I started serving the Lord again as I never have before. I've grown closer to him than I've ever been. I've finally come to know him, really know his unconditional love, grace and mercy. More than once over the past few years I have cried out to him from the depths of my being, begging him to forgive me. I knew it was time; I knew he wanted me to face it—both abortions, and all the pain I had buried. Now, I know with all my heart that he has forgiven me, but it's still difficult to forgive myself at times. I still live with the knowledge, the memories, and the regret. When I went to see Unplanned, it brought it all back, just as I knew it would. I cried through the entire film. But not because of guilt this time. I cried at the horror of it, that we live in a country that would now do this to full-term babies too. I cried for the lives of the unborn. I cried at the thought of how Jesus feels when their blood cries out to him. I cried for every woman making the same decision I did, and the fathers who may want their babies, but have no rights to them whatsoever.

I'll be 50 in May. I'm not married, and I have no children—other than the two waiting for me in heaven. I know they've forgiven me too, and want me to forgive myself. I'm getting there. I think the experience of both pregnancies, and abortions, traumatized me to the point I had no desire to have children. With anyone. Ever. In addition, maybe a part of me thought I didn't deserve a child after what I had done. I'm sharing this because had one person, just one person, reached out to me during either pregnancy, listened to me, offered me help, support and hope, I would not have had those abortions. Had one person been standing outside either clinic and reached out to me, I would have listened. I can say that with absolute certainty. And that is what I want to do for others.