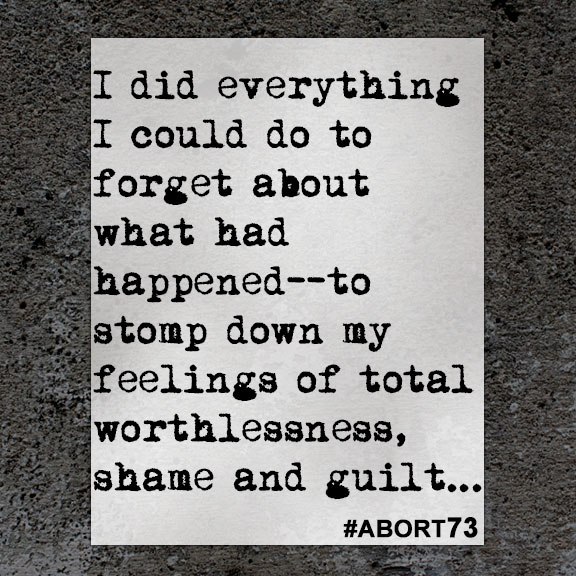 I did everything I could do to forget about what had happened—to stomp down my feelings of total worthlessness, shame and guilt...

In 1981, you couldn't just walk into a drugstore and buy a pregnancy test—and you most likely would not go to your family doctor or local clinic for a pregnancy test if you were an unmarried young woman who thought she might be pregnant. Premarital sex and pregnancy were still highly disapproved in the general public, so you went to the only place you really could go: your local Planned Parenthood. Once through those doors, you would be offered a pregnancy test and if you were pregnant, you would more than likely be guided towards an abortion. You would not be offered any brochures on adoption, pregnancy help or where to get free or low cost prenatal care. They made it simple, efficient, and affordable to get a fast, "safe" abortion. Facing fear and uncertainty, abortion seemed like the answer to avoid a lot of problems. It seemed a little less terrifying than facing my parents and being talked about in the small community I lived in. I would have preferred a marriage proposal, but my boyfriend wasn't ready to get married at that time.

I experienced great trepidation before the procedure. I was fearful of seeing protesters, of being seen by someone I knew, and of the procedure itself. But I went through with it anyway. It went quickly in an almost factory-like assembly-line atmosphere. Cold, impersonal, routine. Afterward, I spent 45 minute in a small room with several other young women lying on cots next to me recuperating from their abortions. Some cried softly; some chatted. We were served lemonade and a cookie. Before I left, I was given a prescription, told what to watch for and sent on my way. I didn't feel any great relief. I felt like I had just sold my soul.

A few weeks later, I woke up with a bad back ache. I spent that whole day and much of the night sick with an ever-increasing amount of intermittent pain. In the middle of the night, I woke up feeling so much downward pressure and pain that I thought I needed to use the bathroom. Instinctively I headed to the first-floor bathroom to be near my parents bedroom. Still, I tried to muffle my moaning and crying because for some reason I was afraid to wake my parents. After some time, I felt a sudden release of pain and heard something plop into the toilet. Looking between my legs, whatever it was was still attached to me by a thin cord. When I stood up the cord broke. I turned around to see what had just fallen out of me and saw a blue, mushy, decomposed little mass about the size of a baby doll. I knew without a doubt that this was my baby. My dead baby. Horrified, I just stared at it. Then I felt faint and on the verge of losing my mind. I did the only thing I thought to do. I flushed that tiny bit of humanity that I had already murdered down the toilet and ran sobbing to the phone to call my boyfriend. I made his parents wake him up. He was able to calm me down somewhat and said tomorrow we'd call the abortion clinic. So I went back to bed and I laid awake til morning.

The next day, I called the abortion clinic. They immediately set up an appointment. When we got to the clinic, my boyfriend and I were quickly ushered into an office where the woman handed me a large book with many pictures of uterine polyps and tumors. She told me that I had a polyp. She said they had told me about it during my procedure. I didn't recall that. I told her it had arms and legs. She showed me more pictures of weird looking polyps with extensions and limbs. I told her it was large and had been attached to a cord. She showed me more pictures of weird polyps and explained how sometimes uterine polyps can expel themselves from the uterus on their own. Then we were left alone for awhile to contemplate. When she returned, we had nothing to say because what was there to say? I so wanted what she had said to be true but knew with certainty it was not. We left the clinic. I was numb, but numb was better than the crushing reality of letting myself feel. Unfortunately, that wasn't to be the last visit to the abortion clinic.

A couple of weeks later I started experiencing bleeding so heavy that I could not stem the flow with normal feminine products. I had to use hand towels to prevent blood from flowing down my legs. I called in sick to work and called the clinic. They seemed weary of me and were disbelieving of the amount of blood I was reporting. But I was insistent it was more. She said she'd talk to the doctor and call me back. When she called back she still insinuated that I was exaggerating and the doctor believed it was just a heavy period and he was very busy today. I persisted until they agreed to let me come in. Someone was waiting for me at the employee entrance when I got there and brought me to an exam room. I was told to get on the table and was left alone there overwrought, crying and curled up on in a fetal position. The woman came back in the room and stated coldly that I needed to stop crying, get undressed and lay back on the table or the doctor would not see me. Again I was left alone. The doctor came in looking impatient and angry and barely spoke to me. He examined me and left abruptly. The woman came back in and said that I would need to have a D & C procedure right now. I didn't ask any questions. I was too traumatized to care. I was prepped and underwent the procedure a second time. This time they let me leave a few minutes after the procedure. I was happy to leave. I never wanted to step foot in that soul-crushing, lying, place again.

Of course this isn't the end of the story. In the immediate aftermath, I concentrated on getting married and having a replacement baby. I became more firmly entrenched in eating disorder behaviors that had started during my high school years. I did everything I could do to forget about what had happened—to stomp down my feelings of total worthlessness, shame and guilt. Over 30 years of my life I have lived with post traumatic stress, went through two divorces and nearly self-destructed. And yet I consider myself beyond blessed because I have found healing in the only place that true healing can be found and that is in Jesus Christ.

My story is really not so unusual. There are countless stories of women who have regretted their abortions. There are numerous stories of women who have had botched abortions—stories of babies born alive, stories of women suffering physical complications after abortions, and stories of Planned Parenthood's unethical practice of selling baby body parts. On the other hand there is science to back up the very early human characteristics and development of a fetus. A baby's heartbeat actually starts weeks before it can be heard! I'm sure you have heard many times that abortion stops a beating heart. That is a true statement, but it seems to me that at this pivotal time in history, abortion affects the hearts of just about every single person alive today. It is a matter of the heart. more than a matter of civil rights. So many hearts are hardened because they believe a lie. They believe that an early pregnancy is a mass of tissue, not a tiny bit of humanity wrapped safely in the precious packaging of a mother's womb. That life is something to be protected and nurtured.

Many women have a heart change when they see the early development of their baby first hand—a 6-week fetus waving arms and legs only millimeters long, an 8-week fetal heartbeat pounding rapidly. Something so tiny and precious and miraculous and totally dependent on them for survival. It's quite a juxtaposition when compared to the destruction seen in the many real and shocking images obtained from abortion clinics—tiny limbs torn apart during an abortion procedure, bodies badly burned, expressions of pain on little faces. Those images are horrible to see, but I'd like to believe even the most hardened heart would soften when confronted with these images. Imagine if that destruction was what was left of your own child. In my mind's eye, every single day of my life, I see a fully-formed yet decomposed little baby lying in a toilet. It is time we as a nation get to the heart of the matter, the truth of what abortion really is, the destruction of human life.