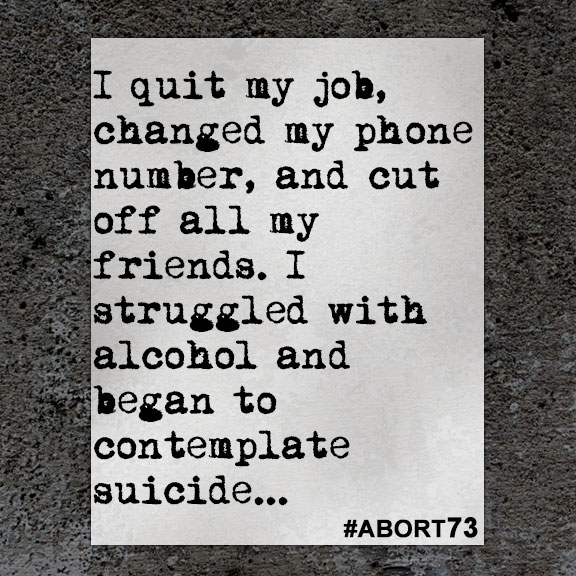 I quit my job, changed my phone number, and cut off all my friends. I struggled with alcohol and began to contemplate suicide...

I separated from my husband and started seeing someone else. After a year of dating and being head over heels, my new boyfriend of one year said he wanted to have a baby. I think I felt loved and flattered. Nobody had ever said that to me. I mean isn’t that what people in love do? I said, yes. We weren’t using protection, and a few weeks later I realized that I hadn’t got my period. I walked across the street to a dollar store and grabbed a test. I worked in a bar and was preparing for my shift so, all alone, I took this test and of course it was positive. My emotions were all over the place, but abortion did not come to my mind. I reached out to my boyfriend and told him what was going on. The next day he told me to abort it, that he had changed his mind, and didn’t want a baby. I was hurt, confused, and sad. I felt used. Out of anger, I told him that he could pay for the abortion because he SAID he wanted one. He lied to me. He used me. After going in circles for a few weeks, I decided to have one. The situation wasn’t any better. We weren’t getting along. I couldn’t imagine raising a kid with someone like him. My now ex-boyfriend told me he could not help me at the moment and left on a cruise a few days later. I was running out of time, and he wasn’t owning up and being the man I expected him to be. Once again, out of anger, I made the appointment. I asked him to pick me up from the clinic, which was five minutes from his work. He said he couldn’t—even though he owed his own business and closed up to grab lunch every day. I went to his work crying my eyes out afterwards, and he asked me why I listened to him. I was wondering the same thing. He asked me to meet him at a restaurant to talk and help me out with some money, so I said yes. I couldn’t stop crying the entire time. I was so disgusted with myself—and so hurt. I didn’t understand how he switched on and off. I told him I was going to leave. I paid for the food and grabbed my things. He was so embarrassed that I had cried and decided to leave him that while I was walking out of the restaurant he screamed in front of everyone, “Don’t ever call me again, you stupid bitch!” Eventually the abuse increased and the calls turned into, “Why haven’t you killed yourself?” I was in a fragile state for about six months; I cried 5+ hours a day. I quit my job, changed my phone number, and cut off all my friends. I struggled with alcohol and began to contemplate suicide. One day I even thought of driving to his house and hanging myself in his yard. I wanted him to see me and remember that. Remember what he drove me toward. I wanted to him to hurt as much as I was hurting. I recovered the best I could on my own—until Jesus came into my heart and filled it with his love. I will always regret what I’ve done. But now as a Christian woman I can share my testimony. First things first, we don’t know how to love without God in our hearts—until we understand the way he loves us. We as women have a lot of choices. We can wait until marriage, get on birth control, make our boyfriends/husbands wear protection. Abortion is not the answer. Jesus loves you. Jeremiah 29:11: “For I know the plans I have for you,” declares the LORD, “plans to prosper you and not to harm you, plans to give you hope and a future.” Give your heart to Jesus Christ and wait on the lord to bring you a man that will love you.