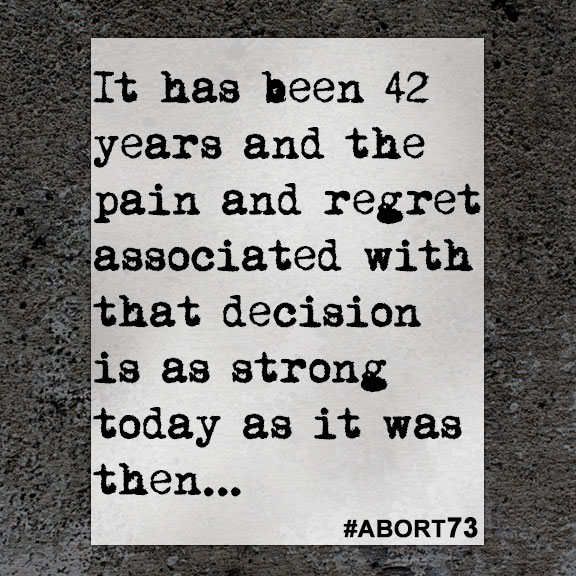 It has been 42 years and the pain and regret associated with that decision is as strong today as it was then...

I was 17 and a virgin when I endured a date rape. The shame and guilt that I felt prevented me from discussing it with anyone. A few weeks later I began to have terrible bouts of nausea and vomiting. I also missed my period, but I couldn’t tell anyone because then I’d have to tell them everything. So I kept it to myself as long as I could. I finally went to see the doctor and after repeated questions about the possibility of pregnancy and repeatedly denying the possibility they ordered a GI series to determine what was wrong. The x-rays showed my baby, and I was told that I was pregnant but that the “fetus” wasn’t viable due to the radiation exposure from the x-ray. The only option was an abortion. It has been 42 years and the pain and regret associated with that decision is as strong today as it was then! I was so young, naive and vulnerable. I don’t honestly know if that one x-ray destroyed my baby. I wish I had checked it out. I wish I would have been more conscientious about the meaning behind the words they used that allowed them to feel ok about what they were doing—words like “fetus” instead of “baby” and “abortion” instead of “infanticide” or “murder.”