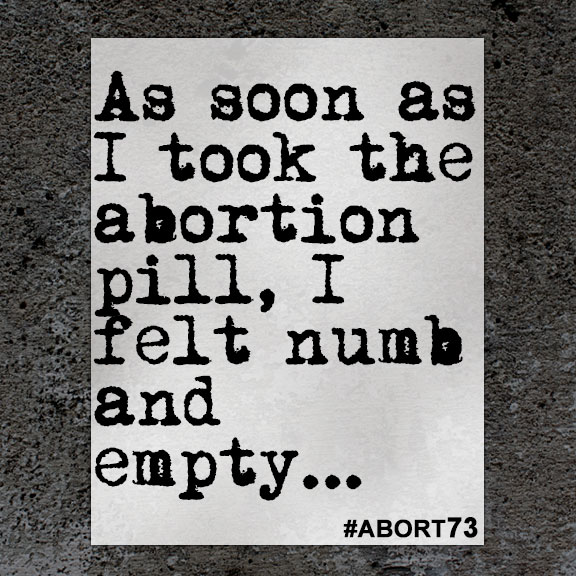 As soon as I took the abortion pill, I felt numb and empty...

On May 1st, 2019, at the age of 19, I found out I was pregnant when both of my pregnancy tests came back positive. I already had a feeling I was pregnant because I had been having unprotected sex with my boyfriend. But now it was confirmed. I couldn’t do anything but cry. I had already told myself if I was pregnant I was going to have an abortion. Looking back, it was very selfish. I didn’t even give my own child a chance at life. I told my boyfriend about the test, and he was more excited than me—which I found amazing because I’m African American and in most African-American relationships, the dad does not want to stick around. But I got lucky. I was the one in the wrong. When I told him I wanted an abortion, he was very upset and against it. I made an appointment for an abortion, but once I got there, I couldn’t even go in because of my crying. I ended up going next door to a clinic for a sonogram. I decided to keep the baby. Then I decided to get an abortion again, and I went through with it. As soon as I took the abortion pill, I felt numb and empty, and here I am five days later, realizing I made the biggest mistake of my life. That was my child that didn’t even get a chance in the world because of me. I was trying to make myself feel better by telling myself I thought my life was over, I’m young, it was going to be hard, etc. But that still does not make it right! I know this sounds crazy, and I know I’ll never be able to get that child back, but I feel like I would have a sense of closure If I have another baby by the same man. If you need advice, I say don’t do it. Yes, times may get hard, but at the end of the day, that’s your little blessing from god.