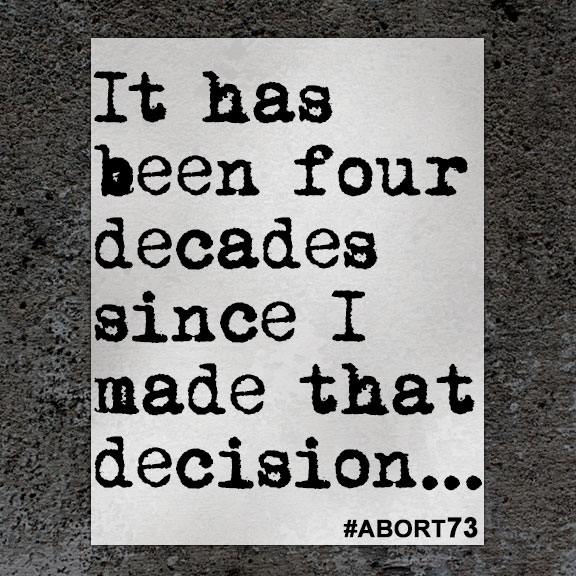 It has been 4 decades since I made that decision...

Raised as a Catholic, I rejected this faith I was raised with in my late teens. I could not reason to the existence of God, and so I denied his/her existence. Reason was my god. I was also ripe for sexuality and the women's movement. I was there at the college clinic getting the pill once it became available. I moved through a series of boyfriends until my mid-twenties, when I moved in with a man I really liked. We lived together for nine years, and were great friends, but our relationship had pretty much run its course when I found out that, despite my use of a cervical cap, I was pregnant. This was the issue that had moved our relationship toward its' end; he became clear that he never wanted to be a father, whereas I was becoming increasingly enamored with the idea of marriage and a family. He was a boy/man in many ways, funny, playful, delightful, but not a grown-up. He also had a number of  issues that I had become concerned about. He was not psychologically very healthy.

We agreed we could not parent a child together. I thought through whether I could be a single parent. I thought through whether I wanted to raise this man's child. Neither option was attractive to me. Abortion was painted as my right, and besides, I was told by pro-abortion supporters, at 12 weeks, all that was happening inside me was a "collection of cells." I had "rights". I exercised them. The hospital I went to was pretty professional; they required that I go through pre-and post-abortion counseling, but I didn't let their questions about my abortion-related emotions and decision-making shake my resolve. At 29, I had an abortion and then tried to forget about it. I ended my relationship, moved out, moved on.

It has been four decades since I made that decision. I have been a "returned Catholic for about 25 years now. I did marry, had many miscarriages, infertility treatments, and finally adopted a child in my mid-forties. I once thought that my infertility was a punishment from God for the sin of abortion I had committed. A wonderful Catholic priest tried to help me with this, countering that given my history with miscarriage, I might not have been able to carry that first pregnancy to a successful birth of a child anyway; I might have lost that first child anyway, without having purposefully aborted her. I appreciated his "forgiving" viewpoint, but of course, I will never know “what might have been.” I don't actually know the gender of my baby. I can hardly bear to type those words, but have always thought of 'her" being "a little blue eyed brown haired girl." Who knows?

I believe that God has forgiven me for the abortion, and have even accepted that the blessings I have had. My good marriage and adopted daughter might not have occurred had I had that first child. I will always wonder "what might have been?" When I think about heaven, I imagine meeting that child there, but my imagination can't capture a reality that makes any sense. Will I encounter a twelve week old fetus? A five year old girl? A grown-up 45 year old? I can only imagine.

In the past year I have seen several films that take on the abortion issue. I am grateful that our culture is allowing discourse about abortion. Increasingly, I find myself thinking, “I want to do something to contribute, to decrease abortions.” This is my first step. I look forward to finding out what the next one will be.