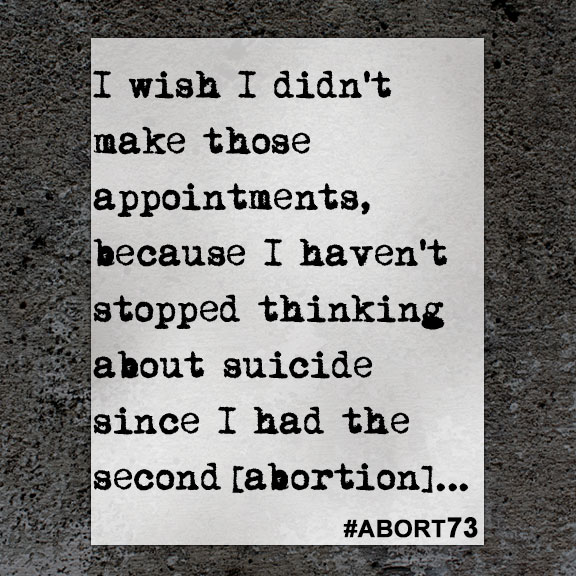 I wish I didn't make those appointments, because I haven't stopped thinking about suicide since I had the second [abortion]...

I was 19 the first time I got pregnant. The child's father was a one-night stand, so I didn't think twice before having an abortion. I mean, I was young. Abortion is not seen as something bad here in Sweden. In fact, most of the girls consider it another contraceptive. I was ignorant of the life-ruining consequences it has on women, so the normal reaction to an unexpected pregnancy in the context I was in, was an abortion. I don't remember feeling any different after this one. I got pregnant again two or three years later, and I was in a similar situation—so, you guessed it, I went through with another abortion, but this time something different happened—not during the abortion, but after it. I started feeling weird, both physically and mentally, lonely and empty. Suicidal thoughts started to appear, and though I haven't ever tried to kill myself, the thoughts are there. Then I started to research about abortion, and I found out I had let a "physician" kill my own children in a very sadistic way. My remorse only got worse. I don't know what was I thinking about then. Maybe I was afraid to take on the consequences of my irresponsible acts. I wish I didn't make those appointments, because I haven't stopped thinking about suicide since I had the second one. I can't stand such a burden, and the worst part of all, I know I can't tell anyone because I know no one would believe me. Knowing the Swedes, most of them would actually trivialize the pain I've been through in the last years.