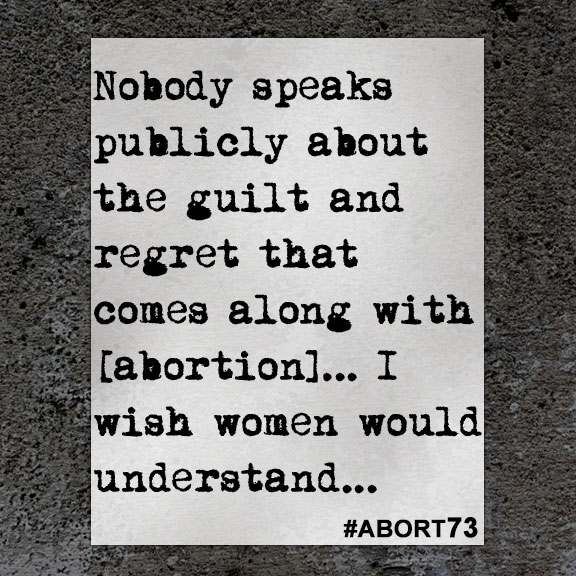 Nobody speaks publicly about the guilt and regret that comes along with [abortion]... I wish women would understand...

For the last eight years, I have had an on-and-off relationship with the man I fell pregnant by. This time around, I was 21; he was 23. Our relationship was toxic, and we weren’t really talking when I found out. We were in the process of breaking up. On December 9, 2018, I found out I was pregnant. I was literally a semester away from graduating and my plans were to move away after I graduated. My first thought instantly was abortion. I was 100% sure, even after he begged me repeatedly for weeks to keep his baby—not only because he wanted a baby but because he loved me and he wanted to be with me too. I was so stubborn. I wish I would have just listened to him. My friends and mother supported my decision, and I think if they’d also been on board with me keeping it, I would have. I am a selfish individual. With all the abortion talk on social media and I so many people against the abortion bans, I don’t understand it. Nobody speaks publicly about the guilt and regret that comes along with it. Babies are a blessing. The biggest gift to life. I wish women would understand. We broke up after the abortion. I graduated and moved away just like I wanted. A year and a half later, I have a great job, I’m in a beautiful city, but I still feel like something is missing.