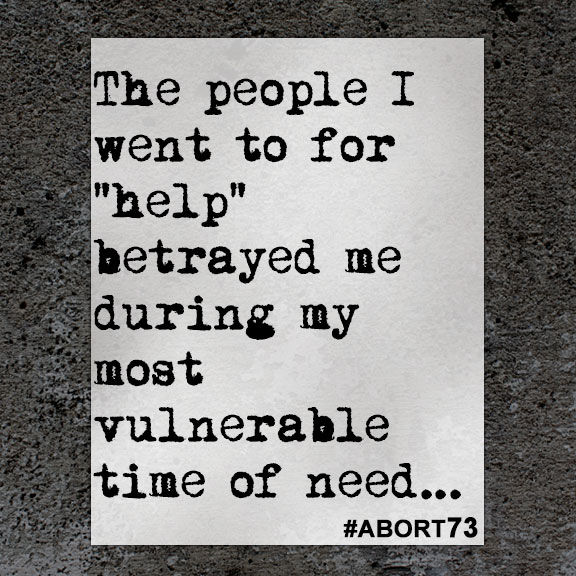 The people I went to for “help” betrayed me during my most vulnerable time of need...

I thought abortion was a quick fix to my problem—pregnant by a boyfriend that was unfaithful and abusive. I knew I didn’t want to be tied to him for the rest of my life, so I walked into the abortion clinic with a $70 copay supplied by my mother, and walked out with my “problem” behind me. My heart was dead to what I’d just done—until years later when I got married and had my first child. Over the next several years, God removed the scales from my eyes to reveal the monstrosity that I had committed in having my own child murdered. The people I went to for “help” betrayed me during my most vulnerable time of need.

I always wondered how it could be so easy to walk into an abortion clinic and have your own child murdered without having to undergo any counseling whatsoever, or blunt facts about the reality of what I was about to do. I was blinded by my selfishness, fear of the future, and ignorance. I always wish I’d had an advocate there for me, to tell me what I needed to hear and show me that I was capable of being a mother—that I already WAS a mother and abortion wouldn’t change that. All it would do was cause irreparable harm to my child. I’ve repented of my sin and received God’s grace and forgiveness because of Christ. While I no longer walk in guilt or shame, I will live with the consequences of my sin until the day I die. I will always remember my first baby and grieve over that tremendous loss and my part in it.