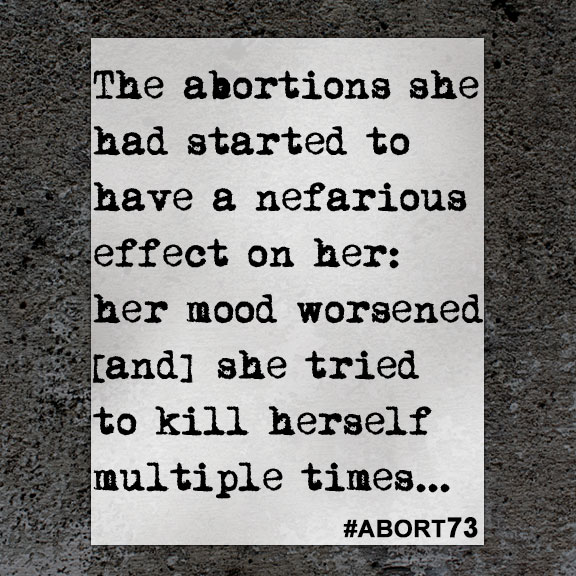 The abortions she had started to have a nefarious effect on her: her mood worsened [and] she tried to kill herself multiple times...

I am a man, so obviously I'm not the one that aborted in this story. Abortion in my country has been legal since 23 November 1955, when Estonia was part of the Soviet Union. Legislation over abortion was only fine-tuned after the restoration of independence, back in the early 90's. Knowing this, I feel kind of fortunate that I was able to be born, as four of my seven siblings were not that lucky. Three were aborted and one was miscarried. My now-deceased mother made the decision to abort three times after getting pregnant on eight different occasions. She had only two children—me and a sister—when she had her first abortion in early 1956, just four or five months after abortion was legalized in the country. Of course, neither my sister nor I were aware of what she had done. At that time, we were 5- and 3-years-old, respectively. Even though we weren't aware of what she did, both of us actually noticed how that event changed her in a negative way. Little did we know it was going to get worse.

A year later, she got pregnant again, but this time she decided to keep her—and my second sister was born on November 17, 1957. Then, in 1959, she got pregnant again, and she decided to keep him as well. My brother was born on January 1st of 1960. Both my sister and I noticed how happy and relieved my mother was to have given them birth after the abortion she had, and we were happy as well, as her mood improved. We were decisive for her to make the decision to give birth to them and that made us both feel glad, but the harsh reality of the Soviet Union we were living in wouldn't let it last, unfortunately.

Some time after my brother's birth, maybe in 1963, my mom would get pregnant again, and although my sister didn't want her to abort, she ultimately did. My sister got mad at her, but somehow we eventually understood she wasn't able to have the baby. I'm not justifying, but, we were poor, she was a single mom of four, and we were living in a small apartment in a big block in the east side of Tallinn. Despite everything I've mentioned, she got pregnant one last time in 1965, but the pregnancy ended in a miscarriage.

After all of that, she didn't get pregnant again, but the abortions she had started to have a nefarious effect on her: her mood worsened, she tried to kill herself multiple times, and some years before her death, she told us she had become an addict to cocaine. Despite her personal problems and having a bad time with the effects, she was able to lead us to escape from Soviet Estonia to Finland—to reunite with her parents whom she had not seen since 1944, shortly after the start of Soviet occupation. Her parents fled the country to avoid being deported to Siberia, leaving my mother with a relative. We managed to escape and made it to Finland, where my mom died of breast cancer at 45 years, in 1973.