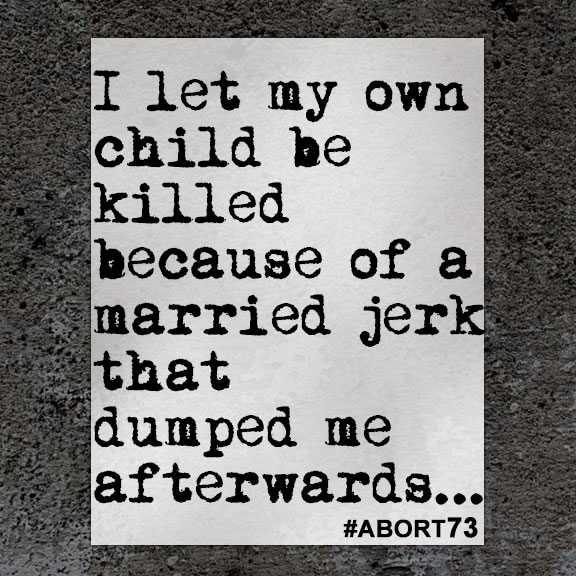 I let my own child be killed because of a married jerk that dumped me afterwards...

Even though I'm now against abortion and oppose its intended legalization—because I've experienced firsthand its disastrous consequences—I hadn't always felt this way. I used to be indifferent on the topic until I happened to have one, coerced. Back in 2001, I was 19 and I had recently entered the university. Life was fine for me, until I got pregnant. I'm not meaning maternity is something bad. In fact, I actually had wanted to be a mother and when I found out I was pregnant I got really excited, but the event set a precedent in my life, as my partner "didn't want to have any children" at the time, and he actually found a private clinic where an abortion could be performed for me without legal consequences. I didn't want to have it, and we argued a lot about it, and the discussion turned violent. It got to the point where he convinced me. It was too late when I noticed I had made the worst mistake in my life. I let my own child be killed because of a married jerk that dumped me afterwards. The pain I had was too bad. I had to quit college for a while, and got addicted to alcohol shortly after quitting school. Although I'm still hurt, I overcame my pain temporarily and ruined his marriage, just as he ruined my life. I'm still not able to heal my wounds. I was too young to realize I had messed up, but I thank God that he gave me a second chance to have a kid, which I didn't waste. In 2006 I had twins, which are the real loves of my life with a good and caring husband. Last but not least, I've heard a lot of times that abortion must be legalized because "women have the right to decide about their own body" or "it's a common thing and it'd be better to be done in safe and legal conditions," or because "the poor die in clandestine abortions." But, with regard to the first reason, it is a mockery to say so! The majority of abortions—like the one I had—are carried out through coercion. It’s been scientifically proved that the phoetus—as the abortion advocates call all of our descendants in a derogatory way—is actually a human being. Regarding the last point, the fact that it is something "common", does not make it good or desirable, much less something that deserves to be legalized.