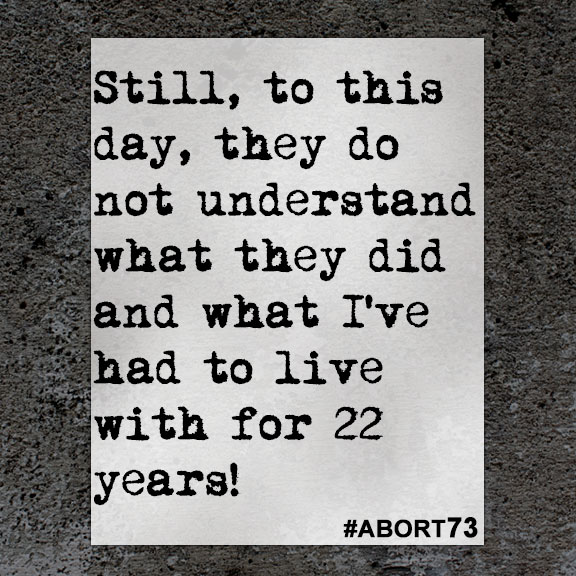 Still, to this day, they do not understand what they did and what I’ve had to live with for 22 years!...

My story began 22 years ago when I was a teenager. The person I was with then was the only person I had ever had sex with. I got pregnant within the first month. He was that "bad boy" type which, for some reason, I liked.

My periods were not regular so I thought nothing about skipping one month’s period. When the next month came around, I still hadn’t started my period. My grandmother was the first one to mention the word pregnant! I will never forget her words for as long as I live. We were swinging on the front porch swing, and I was getting a little nauseated and dizzy. She said, “Baby, you look a little peaked recently. Could you possibly be PREGNANT!!??” Then and there, I sat thinking over the past couple months and my answer to her was. “I’m scared; I could be pregnant.” We had planned to tell Mom together when she came to pick me up that evening, but we didn't get the chance! I ran straight to the bathroom and threw-up. I walked out and mom asked how long since I’d had a period. Honestly, I didn't remember because they were so sporadic. I was at the OB/GYN office the very next morning. Ironically, I graduated nursing school years later, and I worked at the same office. This office DID NOT EVER PREFORM ABORTIONS!

Once the shock of my pregnancy calmed down, anger filled my home. I begged my family to allow me to go to an unwed mothers home and continue school while receiving medical care. I would live there until the baby was born and by that time, I would have been able to think it all through. I would either have the baby or adopt her out to a family that could not conceive.

I eventually locked myself in my bedroom at my own home. Maybe I was on strike. I’m not real sure, but it didn't work. My family as well as my baby's father and his family had turned completely against me since I was refusing to terminate.

I was also told a lie that I had an appointment to have an ultrasound to see if all was well and how far I was into the pregnancy. We ended up about 2 1/2 hours away at a Planned Parenthood!!! I agreed to the ultrasound and a pelvic exam. That was it. The pelvic exam was first and the doctor mentioned my uterus feeling bigger than he thought it should be. TRUST ME, I was so vulnerable and naive back then. I believe my mom was just as naive as I. I feel she would not have pushed me to make this decision, but my stepdad wouldn’t allow for any other choice but abortion. Abortion or you find somewhere else to live!!!! I feel mom thought she should go along with him and not have to worry about making me leave home. I was a mama's spoiled baby girl!! God bless their souls; my real dad died in 1996 from a massive stroke at the age of 58. My 38-year-old brother passed away unexpectedly as well back in 1999.  My stepdad died four years ago from a rare lung disorder. My grandmother died at 90-years-old, six years ago. AND THE MOST PAIN I HAVE EVER FELT: MY DEAR MOTHER, SUDDENLY DIED FOUR MONTHS AGO from a nursing home mess-up! Each of these people eventually apologized for what they had put me through. They all had certain roles in taking away my choice!!!

When I had the ultrasound, I was told to look at the other wall. Back then you didn't dare to question the doctor! I felt the nurses were way to giddy to be in a room with a girl that couldn’t stop her chin from quivering or tears from falling. They obviously did not think they were so loud, or they were distracted, but one nurse communicating from across the hallway let it slip that my baby was a GIRL!!! I felt like I was growing a little girl the whole time, so I already had that instinct.

When my mom, stepdad, and I were brought into the office, the doctor’s first words were, "You are 14 weeks pregnant, into the beginning of your 2nd trimester!!!” What about all those lies I was being fed? its just tissue, a clump of cells. It will soon be all over with for the rest of your life. I still didn't understand the full implication of a 14/15 week fetus, but I found out!!  So his next question was this. "Is this your choice to terminate? Do you want an abortion?” Both of my answers were one word. NO. He told my parents that I was almost too far long for him to be able to terminate safely in the office. He then explained it would be a 2-day-long process. Since my answer was “no” to both question, he told mom and stepdad to take me home and allow me time to think. “I need her back at this office within 48 hours or I can’t do it.” My stepfather embarrassed me so badly that day, yelling at the doctor and staff.  Home we went, more than a two-hour drive, in silence.

By the time we got home, I was exhausted! I ended up going out of a window and going to my grandmother’s. She was the only one who was on my side. She had already called Liberty God Parent Home and set up a visit!! I wanted that so much!! Mom knew where I was when she missed me at home. She came straight over and Nanny did all she could to help me accomplish what I wanted most in this world—to give birth to this baby and keep it. I wouldn’t have had to miss any school work and would have moved on up to my junior year OR I would not be selfish and I would consider an open adoption. That was what I prayed for so many nights and days.

The outcome was exactly this:

1. By the end of the 48 hours I was still being pushed, coerced, was being told I would never be able to raise a kid because I was just a kid myself. It went on and on and on. Unfortunately, your mind can only take so much and I BROKE. I gave in. I pleaded to God how sorry I was for getting weak and giving in. I know in my heart that God was with me and saw my pain that entire journey. HE KNOWS MY HEART! I know I’m forgiven. Then I had to hear my mom, stepdad and a few others, pray for forgiveness for making a choice for me that was not theirs to make. They did. Still, to this day, they do not understand what they did and what I’ve had to live with for 22 years! Maybe now that they are in Heaven, they do know the mental anguish they caused me.

2. They drove me back to Planned Parenthood. The doctor explained the preparation that he had to do for my cervix to dilate for him to be able to get through my cervix and into my uterus. In the first trimester abortion, they just use regular dilators that all OB/GYN offices have but since it was known that I was into my 2nd trimester, he had to place a rod into my cervix which is made of actual seaweed. The doctor inserts this and gives you meds, sends you back home with a time to be back the next day. THAT WAS THE WORST NIGHT IVE EVER HAD TO MAKE IT THROUGH! I had not thrown up but once since I was in elementary school and here I was, rolling around on the floor in agony—vomiting in a bucket. Mom called the doctor and he stated that I just had to ride it out!! What???!!! Yeah, right. then I started telling mom to tell the doctor that I had to have it out now or I’d pull it out myself. He said, “NO, no, you will have to start all over because the fetus is probably already dead.” This was another lie. In my research over the years, I just learned two years ago that that statement was a lie!! PURE EVIL!! There are many women now who share their stories of how the laminaria made them so sick and caused the worst labor. They had the laminaria removed and in that moment felt like they had a 2nd chance and gave birth to healthy babies. Laminaria does NOTHING to harm the baby. What the seaweed does is soften the cervix because the stick they put in you fills slowly with natural fluids and it expands in your cervix until its opened up and starts labor. YES, REAL LABOR!!!

3. I made it through the night, barely, and everything else feels blurred. I had a counselor tell me once that I block bad memories out to keep me safe from hurting. My cousin, also my best friend, rode with us this time. I really needed her. I must have been on medication that left me groggy but I remember her keeping a cool rag on me. She held me the whole way in her arms, and we both cried and sang. No memories of the waiting room except for feeling humiliated. The nurse called me back since I seemed to be the one having lots of emotional issues as well as being very nauseated. They gave me 20mg of valium and then started a drip. I just lay there and cried. The nurse would ask a simple question, but I just could not focus on what she said or what I needed to say back. I DID NOT CARE. This was the most unfair thing ever done to me. I really thought that if a doctor saw a young girl who had plainly told him that this was not her choice, then he wouldn’t go through with it. But he never took the cue that, “Hey, I think this girl is really in pain because she was forced to do this!!!”

I just don’t know exactly what to do to step up, stand up, and never be silent again!!! God says if we know of evil doings, we must speak them. Well, !’M READY.