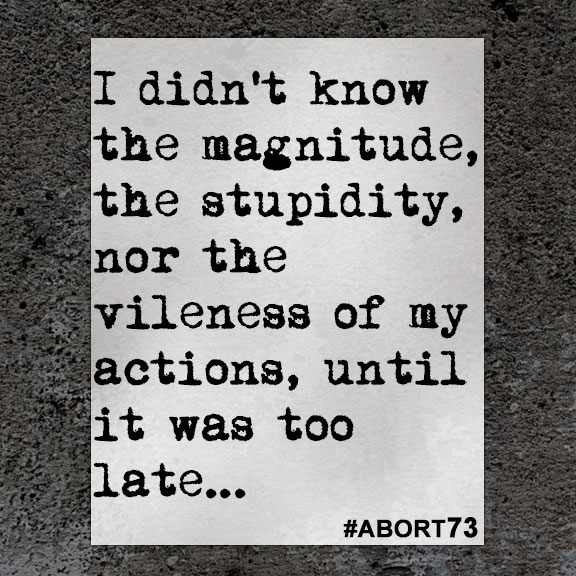 I didn't know the magnitude, the stupidity, nor the vileness of my actions, until it was too late...

Abortion became partially legalized in my country last October. I wouldn't have thought I would have an abortion and get away with the crime, not in a country where it was completely illegal. I used to have a "pro-choice" view on this topic, until I had mine—three months ago. I had an abortion at a local hospital, alleging that I was raped. That is one of the few circumstances in Chile which make it legal. I didn't even have any medical exams to prove me right. I got an abortion five days later.

Now you might be wondering, why did I abort my child instead of finding a better alternative for it? Well, as a teenager I was excited, but scared when I found out about my pregnancy. I mean, my parents would not have received the news very well, and I was starting school again after summer. My ex-boyfriend and I didn't end well, and I took advantage of it. It all happened too fast, and I didn't know the magnitude, the stupidity, nor the vileness of my actions, until it was too late. Now I have this remorse in my heart. I didn't mean to do things this way, but I did them, and have to deal with the consequences of making a false report and killing my child.