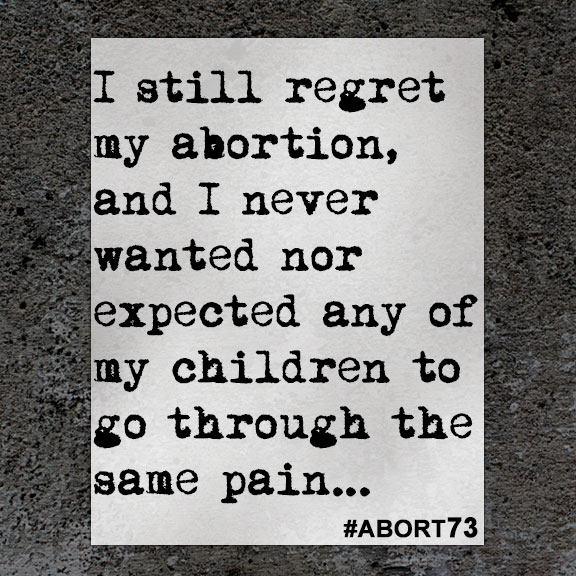 I still regret my abortion, and I never wanted nor expected any of my children to go through the same pain...

In the summer of 1991, I had an abortion. I was 19 then. Even though I’ve had three children since, I still feel bad. I regret it because I didn't do anything to save my baby.

When I found out I was pregnant, I told my then-boyfriend, later-husband, and now ex-husband about it. He seemed to be happy about it, but his mother, who always hated me, didn't like the news. She ordered him to convince me to abort.

I didn't want to, but somehow he did convince me to do it, and then he made an arrangement with a doctor in Veracruz to perform my baby's murder. The next weekend, I got in his car, and I went through the procedure. That abortion hurt me more than any of the three caesarean sections I had to have to give birth to my other children.

One of my children was almost miscarried at seven months of pregnancy in January 1999, but thank God—and my gynecologist—I was able to give birth the very morning I was notified of the miscarriage risk.

This same son got a girl pregnant when he was 16, in the summer of 2015, but his then-girlfriend was forced by her mother to abort. That abortion caused him severe psychological issues, and it ruined the girl's relationship with her mother.

And I'm doubly sad about it, because I still regret my abortion, and I never wanted nor expected any of my children to go through the same pain I've been through the last 26 years.