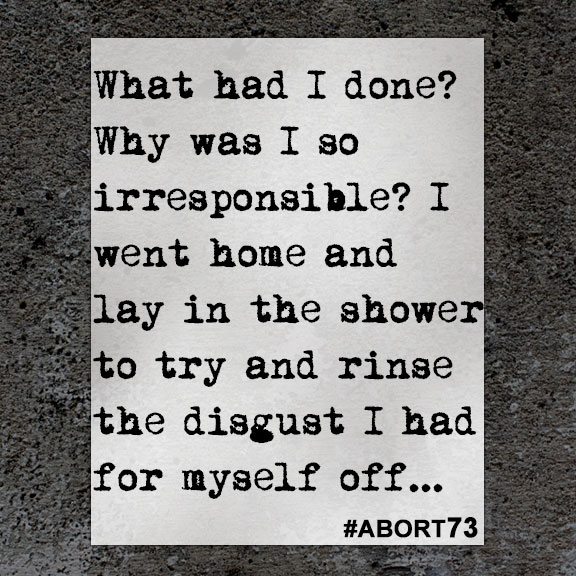 What had I done? Why was I so irresponsible? I went home and lay in the shower to try and rinse the disgust I had for myself off...

[Abortion was] the worst decision I ever made. It all began when I started my career. I was so excited and enthralled in my new career that I worked so hard to obtain. During this time frame, my marriage of six years was shattered. There was no fixing what was destroyed for so long. My ex-husband and I had a 1-year-old baby boy, who is my life. Getting a divorce was what I wanted; it's inevitably what needed to happen. However, I felt it would completely destroy my beautiful son’s life. So, years went on and I always knew in my heart I wanted another child. I wanted my son to become an amazing big brother, but I knew bringing a child into an already-broken marriage was probably not a responsible decision. I attempted counseling and nothing worked, I had come to terms my marriage was over.

I began working a lot more when I met a guy I worked with. Unbeknownst to me at the time, I grew to fall in love with him. We became such good friends. I spoke and he listened, but not the type of listening to impress me. He truly cared. Little by little, conversation after conversation I fell deeper and deeper in love with him. But there was a huge problem, I was still married and he had a girlfriend. Several months went by and ironically I came to learn he was going through the the same situation. He was in a six-year relationship, with a 4-year-old child. Eventually we confessed; we loved each other. I honestly can say, I never felt this way about anyone in life, not even the man I chose to marry. The lonely nights of being apart were becoming more and more painful. It was almost a physical pain to be apart from someone I grew to love so much.

Then the day finally came; he called and told me that he ended things with his girlfriend. I was in a state of shock! Now it was my turn. And I didn't quite know how to respectfully end a marriage, but I did. It was not long afterwards that I received the worst news, that to this day I replay. The man I had taken my barriers down for, who I gave my heart to on a silver platter called to let me know his girlfriend was pregnant. Me, being so in love, told myself I can get through that. I made the decision to stay. It almost didn't seem real to me at all. After a couple months, my boyfriend and I ran into a very huge hurdle in our relationship, one that almost tore us apart. But we worked through it, it was a very rough time but we came a long way, so I thought.

After reconciliation between us, there was a short period where things seemed to be going good. Then life hit me with a ton of bricks. While at work one evening, I had this weird feeling. I knew my period was super behind. It was always irregular so I thought nothing of it, until the cravings began. That night at work my life drastically changed. I took a pregnancy test to find I was pregnant. My heart burned like a fire. I was excited inside because I always wanted my son to have a little brother or sister. And I felt he was at a good age to where I can have them close. I knew the situation with my boyfriend getting his ex-girlfriend pregnant wasn't ideal, but I honestly didn't care about her. I was happy for me. I waited until the next day to tell my boyfriend, whose reaction was not at all what I expected. I was told I couldn’t keep the baby because he couldn’t raise two infants with two women at once. I was also talked into abortion because of my career. He told me over and over again how I wouldn’t move up if I was pregnant.

My career meant so much, but it still never felt right. A couple months went by and I was coming near to a point where I would be too late for an abortion. Unfortunately for me, I wasn't strong enough to stick up for myself emotionally. I wasn't strong for my unborn baby who at the time, I found out, was 15 weeks. I call her a she because that's what I dreamt of, but she had a heart beat and little precious hands and feet. As the end of September neared, I found myself at the women's center making the decision that I had no idea would affect my life so significantly. And then, it was done. I lay in a daze in the recovery area and all I could do is cry. What had I done? Why was I so irresponsible? I went home and lay in the shower to try and rinse the disgust I had for myself off. It's been a year now and I still hate myself. My boyfriend who had his daughter gets to bask in the glory of having a beautiful healthy baby, and the torn, destroyed me just sits at the sideline and watches as he father's a child that I wish I had.

It has been an uphill battle trying to allow myself to accept his child but every time I look at her, I see the image of the baby I destroyed. I get extremely jealous of his picture-perfect little family because it is what I wanted. Having had a child prior made it even more difficult. I see my son and it kills me to think of anything bad happening to him or someone that wants to harm him. I feel like a hypocrite because the innocent baby I gave a heartbeat to I harmed. I took her little life. I live my life wondering what could have been. I absolutely hate myself for this decision. It has psychologically destroyed me and my relationship because I hold so much resentment towards not only my boyfriend but his daughter as well. I wish I had a time machine to go back and change things, but I can't. I hope one day in another life to meet the beautiful child I once provided life to, just to embrace him or her and say how sorry I truly am and that I love them. There is not a day that goes by that I don't think about my beautiful little angel.