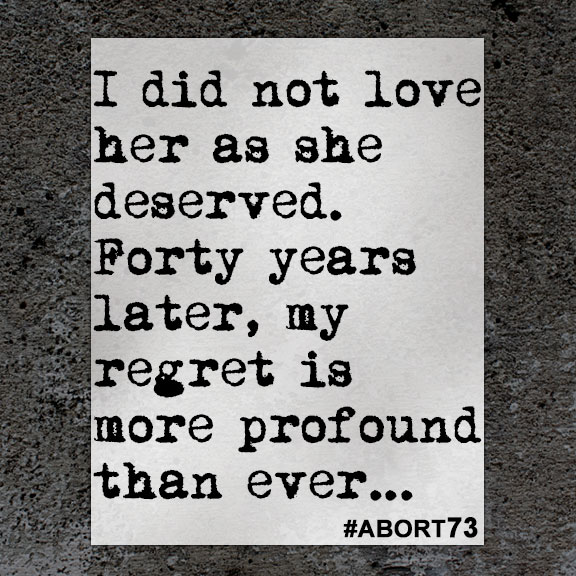 I did not love her as she deserved. Forty years later, my regret is more profound than ever...

It was 1975, two years after our US Supreme Court unleashed the most unrestrained abortion law in the world—legalizing abortion up to the moment of birth. I was in high school; my girlfriend was pregnant and wanted the abortion. I was confused and lacked wisdom. Neither of us imagined what the real life consequences would be, in part because we were scared. It was also because the media and abortion advocates like Planned Parenthood were hard at work changing the hearts and minds of the public. It seemed so easy. She went to the abortion facility with a close friend; I wasn't invited. Afterwards, our relationship was strained.  Life moved on and we went separate ways. On rare occasions, we’ve had contact through the years. We are now in our 60's. I have never forgotten that day and how cowardly I was for not trying hard enough to stop her from following through. I did not love her as she deserved. Forty years later, my regret is more profound than ever.

For reasons known only to Him, God blessed me with a wonderful wife and three great children who are now grown, yet the experience of having children causes me to grieve even more for the one child I never knew. I'm sure it will always be this way until the day I die. It was only through discovery of the miracle of God's grace that I have been able to cope and learn how to endure that burden.

To all the young women who have been pressured into abortion by a cowardly boyfriend, I urge you to learn from the mistakes of others like me, my former girlfriend, and literally millions of others since 1973. Allow yourself the benefit of perspective which can only be gained through distance. Break it off swiftly and permanently! That may sound harsh, but I promise you will survive and even grow. There is more help available now than ever.

For a boyfriend to use anger and manipulation to drive you to abortion during a time of weakness is utterly unacceptable. It clearly demonstrates the irresponsibility that I once held. More importantly, it demonstrates that he's not looking out for you. Face it: he's a cad and If he has no capacity to love his own child, he can't love you as you deserve. Resist further manipulation. He will make a poor partner and father. Move on. Repent. Seek forgiveness, and you will be led to the one who is waiting for you! With prayers and much affection, a humble father.