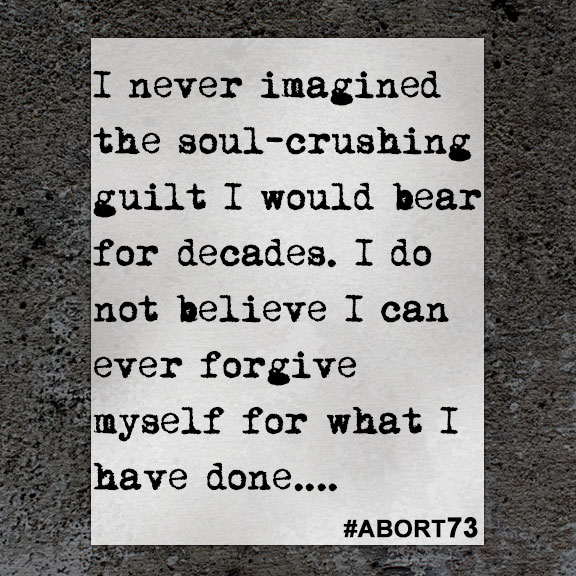 I never imagined the soul-crushing guilt I would bear for decades. I do not believe I can ever forgive myself for what I have done...

Thirteen years ago my ex-girlfriend got an abortion when we were in college, and my participation and complicity still haunt me to this day.

I thought time would heal the would, but I think in reality the guilt within me only got worse over time. At the time, I thought I was encouraging her to do the right thing for her and for me, so we could both finish college and move on—but I was terribly terribly wrong.

It happened after I accidentally got her pregnant when she was only 19 and a sophomore in college. I was 25 and in graduate school. We had started dating two years earlier when she was a senior in high school, and after two college transfers and moving some 400 miles away, we had some ups and downs in our then long-distance relationship. She had been on birth control for most of those two years, but had recently switched over to the patch instead of the pill, as she was often forgetful of taking her pills and neither of us wanted to risk pregnancy. It was appropriate that we tried to be proactive about contraception—but in some ways, I think maybe we both took the contraception for granted and just assumed we could do whatever we wanted without consequences.

I remember it like it was yesterday when she called me on a Wednesday afternoon to tell me she had missed her period and was pregnant. I asked if she was sure, and she said “yes,” that she had taken three pregnancy tests.  She and I were living apart by several hundred miles at that time, and only saw each other every-other weekend, so we had to have the conversation over the phone. My heart was racing.

I asked her what she wanted to do. I put that burden on her. I should have manned up. I knew both her older sister, who was around my age, as well as her mother had previously had abortions, so I expected that would be her response. When she said she was thinking about going to a clinic, I immediately just told her, "I fully support whatever decision you make.”

At the time, saying "I fully support whatever decision you make" sounded like me trying to, well, be supportive. But she wanted me to tell her if I thought it was the right decision. Since that’s what she wanted to hear, that’s what I told her. I told her that I thought it would be better for her and me both, college-wise, if she had the abortion, so we could finish school without the burden of being parents. She vaguely agreed. She wanted to hear from me that the abortion would somehow not harm our sometimes-rocky relationship. I told her I thought it would be alright, and that I'd be there for her.

I was so wrong. I was being selfish and not thinking about the long term with the right perspective. It was a terrible mistake and one that I am still living with well over a decade later.

She scheduled the abortion for that following Saturday in Dallas. I told her I had to work and could not make it. That was another terrible thing I did. Her mother and sister went with her, while I stayed far away. I wasn't there for her the day of her visit to the clinic. I wasn’t there for her the day after. I didn't go see her for a month afterwards, with me claiming it was my exam schedule. How awful. Yes, I had final exams, but I could have driven the seven or so hours to go see her and be with her then, but I didn't. It is one of the lowest things I ever did in my life, and I still regret it.

I should have driven to see her the day she told me she was pregnant. I should have walked right out the door of my apartment, cell phone in hand, and gotten in my car and driven for seven hours straight to see her and talk to her in person about it.

Then I should have proposed to marry her, right then and there. Maybe taken her up to a beautiful spot in the hills where I'd even thought about proposing to her before. Sure it was ahead of schedule. So what? There were lives at stake.

I should have proposed to her, told her I loved her, told her I wanted to be a good father and to have a family with her and that I would do everything in my power to make things right.

I should have manned up.

I didn't man up, because I am a coward.

Thirteen years later and I still think about what I should have done and what happened due to my failure as a boyfriend, and as a man.

Instead, what happened is that after the abortion, we both sank into depression. We tried to act like we were going to work through it for a few months, but we both became more emotional and more volatile.

Within a month of the abortion, I had already started secretly seeing another girl while I was working that summer in an out-of-state internship. It was absolutely shameful and despicable.

Maybe in my mind, I was just ready to flee. I had previously been ready to try to move on from the relationship the year before that, but had never let go and then the accidental pregnancy happened. I should have been a Real Man about it, but I was not.

So by the end of that following summer, after a lot of heartbreak, we finally broke up. Or rather, I broke up with her, because I couldn't stand myself or what I had been doing. I couldn't look her in the eyes anymore, knowing what I had done, and knowing that deep down, my support for the abortion is what let her do it. If I had pushed back and held firm that we keep the baby and raise the child as a family, I'm positive she would have said yes.

So while I hid behind "it’s your decision as a woman,” in reality, I was not only complicit, I was an accomplice. That is a sin I know I will carry the rest of my life.

After we broke up, we both moved on to other relationships. We had little to say to each other after that. I tried to be friendly a few times, a congratulatory note when she graduated college and got into grad school, but she didn't want to talk to me anymore. I can't blame her.

She deserved a better man than me. A man who would face his responsibilities. She deserved better than me.

In the wake of the abortion, I have never publicly talked about it.

I have never told anyone else. Not my parents, not my doctor, not my best friends, not anyone else.

About six months after the abortion is when my drinking started getting worse.

A year after the abortion, I was drinking hard alcohol alone every night in my apartment. I’d go through several bottles of hard alcohol a week.

My drinking and alcoholism only got worse from there.

I am 100% certain that the underlying cause of my alcoholism, really and truly, is my unresolvable guilt over the abortion and my part in it.

I only really developed a serious drinking problem after the abortion—when the guilt started to set in and really sink in.

Even though I went on to marry a much younger woman about three years after the abortion, and she has been very patient with me throughout my alcoholism—even after a DWI, two wrecked cars, dozens of black outs, and getting hospitalized for alcohol poisoning—I still never told her about the abortion.

Even when my wife was struggling for years and years with infertility, and the guilt was swelling within me that I might have destroyed my only chance to be a father, and I was drowning all that guilt in all the alcohol I could find,I still never told my wife about the abortion.

Even three years ago, when I finally became a father, and I finally realized all I had truly lost, I still never told anyone about the abortion.

I never told anyone about it because it is my greatest shame, my greatest regret, and the biggest mistake of my life.

I wanted to share my story here, so that you heard from a man who has regretted his part in an abortion for years. I never imagined the soul-crushing guilt I would bear for decades. I do not believe I can ever forgive myself for what I have done.

Thank you for letting me share. Please hold your babies and love them as long as you can.