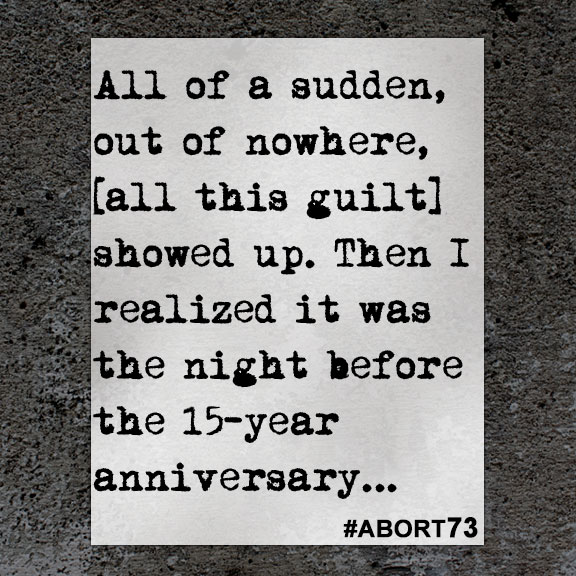 All of a sudden, out of nowhere, [all this guilt] showed up. Then I realized it was the night before the 15-year anniversary...

When I was 17 I had an abortion—NOT by choice—but out of fear of having to raise it alone and pressure from the father. No family would support me as they did not approve of my relationship with the father to start with. It was the absolute worst experience I have ever had. My boyfriend dropped me off and left. He didn't even stay. They took me in the room, after I got the gown on, and did the procedure. When it was done, they gave me medicine for nausea. I was so distraught that I almost choked on the pill. The nurse asked if I would be ok and took me to a chair to recover until my so-called boyfriend came back. He was the only person that knew this was happening. I felt so alone. So many things went through my head in that hour. On the ride home, I was quiet. He tried having regular conversation, and I just stared out the window, not talking. The hurt I felt was awful. It still is. I still have so many questions for him that he didn't answer. Even now, 15 years later, I feel like I deserve answers. However, I have a 12-year-old, a 10-year-old, and an amazing husband that would never treat me like this guy did. I haven't talked about this to anyone in detail because I don't feel like anyone cares. My family surely didn't care and the only one that did was my grandmother. When I talked to her about it before she passed, she had so much compassion for me. But I am feeling so guilty now. All of a sudden, out of nowhere, it showed up. Then I realized it was the night before the 15-year anniversary.