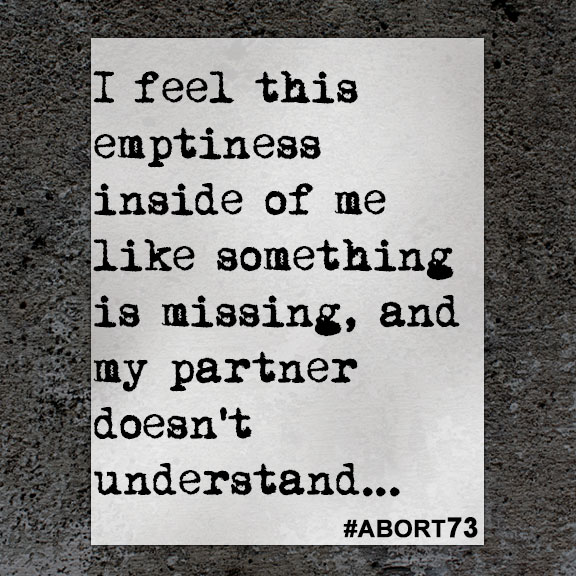 I feel this emptiness inside of me like something is missing, and my partner doesn't understand...

I had an abortion on 30th November, 2016, and it is my biggest regret. I went to the doctors when I was 5 weeks and 6 days pregnant. I then went to the clinic and they did the scan but said my pregnancy would end in a miscarriage, so my thought was I’d be helping the baby or fetus out—but months passed, and now a year later, I get so upset about this. My boyfriend, who is the dad to the baby I killed, isn't there for me. He doesn't feel any emotional feeling towards this as he wanted me to have the abortion. He used anger against me to make me to go the clinic, and I regret it. I wish I could turn back time. I feel this emptiness inside of me like something is missing, and my partner doesn't understand. I am glad I am still with him as I love him so much. I’d be lost without him, but at the same time, I get angry sometimes and I won't ever forgive him because of how he was towards me during that time. But I hope one day we can have a baby together, and I hope he will be happy too. I imagine becoming pregnant and showing him the test and him being happy and smiling. I just hope it’s like that.