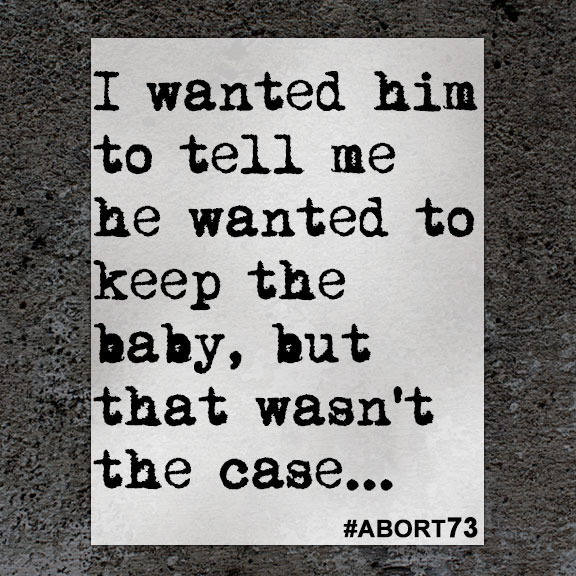 I wanted him to tell me he wanted to keep the baby, but that wasn’t the case...

I recently had an abortion. If I’d got this (pregnancy) news four months ago, I’d have been proud as punch. But at this time, it was one more thing to the list. I was questioning my happiness with my partner. Four months ago, I was so happy and would have loved the Idea of a baby, but now it was felt with sadness and a heavy heart. I told my other half through tears. A part of me hoped for him to hold me and tell me that he was ready for a new chapter and a family. Instead I was met with, 'Oh sh—! What do you want to do?’ I wanted him to tell me he wanted to keep the baby, but that wasn’t the case. After much thought, I came to the decision to have an abortion. I mean how could I bring a child into this relationship If I myself am questioning it? I first had a medical abortion, went to the clinic, and was made to feel at ease and genuinely cared for. I took the set of tablets and went home and braced myself for what I’d read online was going to happen. Forty-eight hours passed. Nothing.

I contacted the clinic and was seen that very day, where they confirmed the medical abortion hadn’t worked. They proceeded to book me in for a surgical abortion. This happened a week later. Although my partner came with me, it was a weird feeling. I felt distant and alone. Yes he was there, but I was alone in a room, then waiting to go into the theatre. He didn’t know the nerves I felt or the pain I’d go through or the different waves of emotions. I felt so alone and scared, but the nurses were so warm and caring. My surgical abortion went on without a glitch. I had minor cramping and bleeding. I feel guilt and shame, but I [believe] it was the best decision.