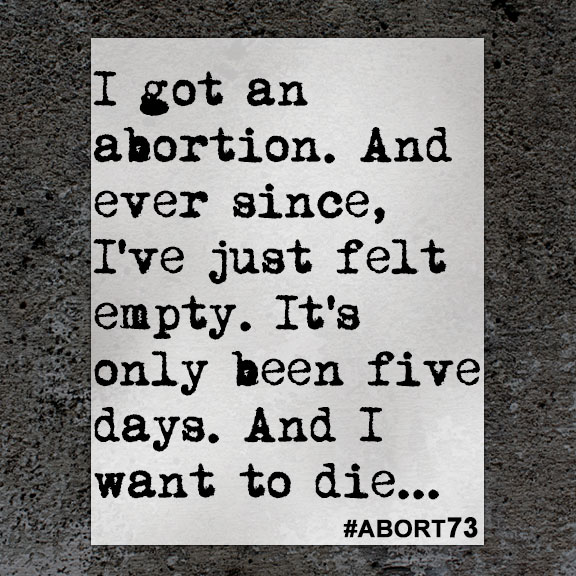 I got an abortion. And ever since, I've just felt empty. It's only been five days. And I want to die...

I don't even know where to start.
I don't even want to type this, but I feel as if it's necessary.
I just can't do any of this anymore.
Life that is.
I've tried to be positive.
And look on "the bright side."
But what if there isn't a bright side?
I got an abortion.
And ever since, I've just felt empty.
It's only been five days...
And I want to die.
I regret it so much.
But there's no going back.
I put the pill in my mouth and held it there.
I thought for a second...
Was I was doing the right thing?
And my brain,
My stupid, stupid brain,
Said yes.
I should have listened to my heart.
My heart was screaming at me,
"Don't f—ing swallow it!"
But my brain made me do it.
I instantly regretted what I had just done.
The drive home was agonizing.
My boyfriend wanted me to do it.
He convinced me that it was what we needed.
I have so much anger towards him.
The thoughts were running through my head
What will my family think?
We got home.
And I lost it.
I wanted to leave.
I packed my stuff.
And started walking.
My boyfriend chased after me.
I screamed at him, I told him I hated him.
He convinced me to come back inside.
He held me as I cried out loud.
He said:
"We'll get through this together."
That was a lie.
The next day I took the second dose.
It was the most traumatic thing I've ever been through.
I just couldn't stop pushing.
After deficating and puking at the same time,
I took the pain medication.
That took 30 minutes to kick in.
It knocked me out.
I woke up in the middle of the night...
Blood was running down my legs.
I could feel the first clot starting to come.
I ran to the bathroom,
Sat on the toilet,
And out came what I expect was the fetus.
My heart broke.
How could I do something so cruel to my own blood?
To something I created?
I cried, and flushed the toilet.
That happened about three more times..
The day after wasn't any easier.
If anything, it was worse.
My boyfriend went to work,
And I was alone.
With my own thoughts.
Throughout the day I got a text.
"I want to go out drinking with friends tonight."
I didn't know whether to be upset or pissed.
How could he be so selfish?
How could he tell me I wouldn't be alone?
My heart was racing.
Needless to say, he went out.
And I spent the night alone.
The night after everything.
I contemplated suicide.
The next day I went to my grandma's.
She knew I was getting an abortion.
And she is upset about it.
She called me a killer.
She said she will never forgive me.
I am alone.
I wish I never would have done it.
And given the chance to go back,
I wouldn't even consider it.
I would tell my boyfriend to f— off.
And I would leave his a—.
We made the choice to have sex,
We should have dealt with the consequences.
I was always pro-choice.
And I always said if I was in that position,
I would never choose to have an abortion.
Why did I let a guy persuade me into doing something...
Something that I didn't want?
It is something that will haunt me until the day I die.
For some women, abortion is the right choice.
But it wasn't the right one for me.