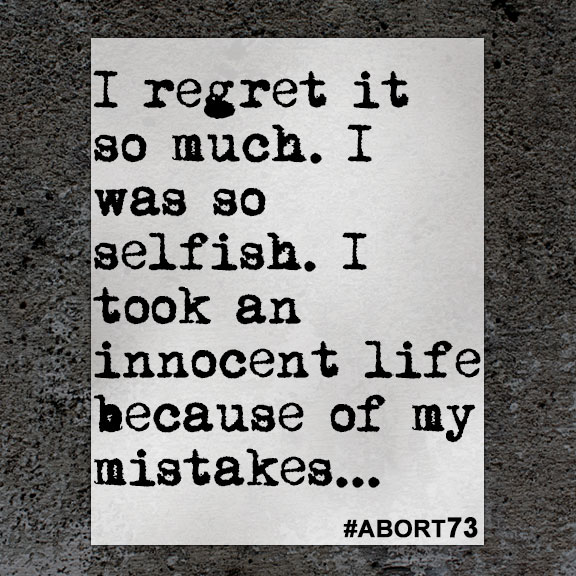 I regret it so much. I was so selfish. I took an innocent life because of my mistakes...

I am 24 years old and the mother of a two year old. I’ve been in a relationship with my baby father for almost three years.  When I found out I was pregnant with my 2nd child it was after Christmas, and my daughter was only 10 months. My relationship was really stressing me out. We had a lot of trust issues going on, and we were living with my mom. When I found out I was pregnant I was scared, but he was ok with it. But my family insisted on an abortion because they thought it was going to be hard with two kids, and my relationship was not good at all. I remember feeling so angry with my baby father and decided to do the abortion.

He dropped me off. There was some guy outside preaching about abortion but I ignored him. I paid the $500 cash and was called in for an ultrasound. I asked to see the baby, and it was the worst thing I ever did. I started to repent, but the grudge I felt inside towards my baby father and everything my family told me made me continue with the abortion.

It has been two years, and I wish I could have someone understand how I regret it so much. I was so selfish. I took an innocent life because of my mistakes, because of my problems and because everyone was against it. Now I can’t forgive myself. I will never forget the ultrasound. I was four weeks and baby was there formed. I wish I could go back and have him or her in my arms. Years go by and I can’t stop thinking how old she or he could have been by now.

I feel stressed. Now I don't want to have any more kids because I don't think it is fair. :(

I hope someone can understand. This is the worst thing I ever did in my life.