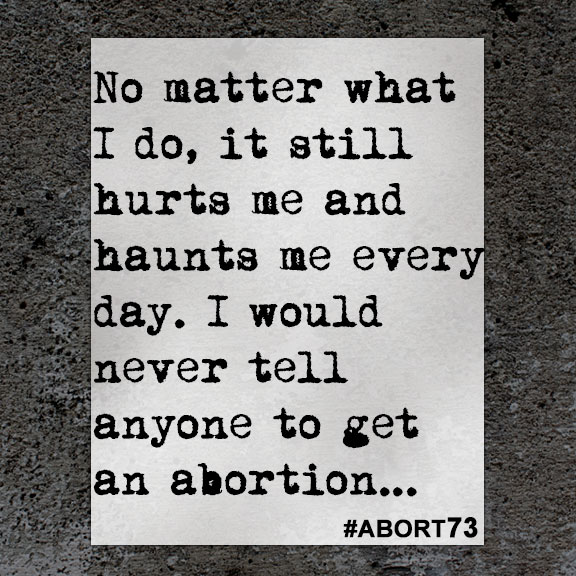 No matter what I do, it still hurts me and haunts me every day. I would never tell anyone to get an abortion...

I had just ended my long-distance relationship of three years. I decided to have some fun since he hurt me so bad. So I went on a trip to see this really cute guy who was in the military. I was out there for about a month and a half. Once I got back home, I noticed I felt drained. I didn't know why; it made no sense to me. Something in my gut told me to get a pregnancy test, but I didn't think I could get pregnant since my OB/GYN gave me something that wound up messing up my menstrual cycles and stopping them completely. I still remember taking all eight pregnancy tests just because I was in that much shock.

I didn't tell the father yet because I wanted to be sure before telling him, so I made an appointment. Even though I already know I was pregnant, I needed the doctor's confirmation. After the appointment I got in the car and texted the father because I knew he was at work. He asked if I would have an abortion but didn't force the decision, surprisingly. When I told my mother, she was completely supportive—which made me happy because I knew I was gonna be a single mother since the father lived in Kansas and had gotten back with his ex-girlfriend. The day before my sonogram I asked the father if he wanted to see the picture afterwords, but all he said was, “I'm so stressed out from this; I don't know how you’re not.” I told him I didn’t have time to stress.

The next day was so exciting for me. I had my mom, sister and one of my friends with me. My mom was explaining to my autistic sister that I had a baby in my belly. She pointed to my belly button and said he or she was right there, but I was so in tune with my baby that I knew exactly where she or he was, and it wasn't right there. My mom said I was wrong, but that's nothing new.

When the doctor started looking for the baby, she found my baby right where I knew he or she was. I was so happy. I was 7 weeks, 2 days. I dropped my friend off and went to my father’s. I told him how I was pregnant and he took it well. To my amazement, he told me that he already knew I was before I told him. But the next day was one of the worst day of my life. It was my mother’s birthday. I took her out to eat, even though the food made me sick. We had fun; I told her to drink for the both of us—that I’d drive. Later that night I told her to got out with my aunt and she did. When she got home she was breaking stuff. When I grabbed her to ask what was happening, she freaked out and shoved me. I found out she had gotten raped. She completely shut down; she wasn't getting better.

I let her take her time to recover because I know what it’s like to be raped, but having to take care of a severely autistic and multi-disabled child isn’t easy—especially when they are mad. They get extremely aggressive. I began to worry if it was a good thing to have a baby, for fear that my mother would commit suicide and leave my autistic sister to care for. When I reached out for help from my dad, he said that it wasn’t his problem and that I was stupid for not getting an abortion. He told my mother that he and his girlfriend wanted to talk to me and convince to get an abortion. I haven't been able to hold down a thing since, not even soup or juice. For two months I was starving, and with other family problems, it began to get worse.

That was all I needed to convince me to get an abortion. I knew my mom and sister needed me more, and I couldn't give this baby all my attention. I was 12 weeks exactly when I got my abortion. Before the appointment, my mom told me I could stay home, that I don't have to do it. But I was trying to be strong and do it, so I could help them.

When I got to the waiting room I began texting my mom, saying I didn't wanna go through with it, but it was too late. I began to bleed after they gave me the first pill. I tried to stay strong when they began to sedate me. I remember trying to hold on to every last bit of strength that was being stripped away from me at that very moment. I woke up and I was in the recovery room crying. I was watching a bunch of girls going into the recovery room, laughing like it was okay. I didn't understand how they could be so happy. I died that day, when I took my baby's life. I kept telling myself, “don't let what you just did be in vain.” No matter what I do, it still hurts me and haunts me every day. I would never tell anyone to get an abortion. I've never been pro-abortion, unless you were raped, you might die, the baby is suffering or having problems, or you’re very ill. I'm still very much against it except for those reasons. I truly regret my decision, even though I know my sister and mother really did need the help.