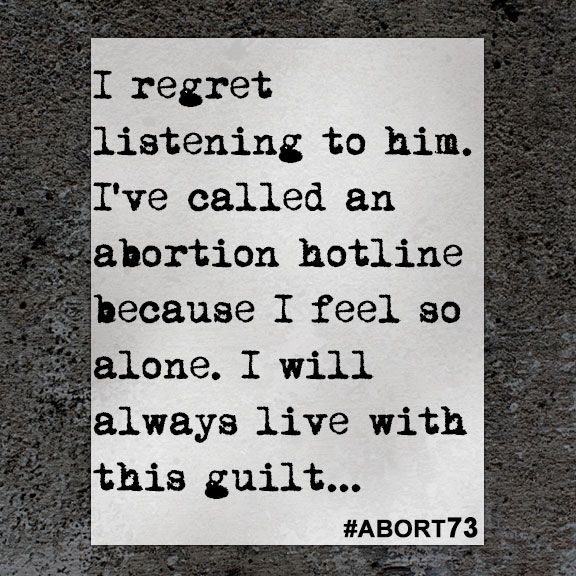 I regret listening to him. I've called an abortion hotline because I feel so alone. I will always live with this guilt...

I don't really know where to start. I am a 20-year-old college student. My "boyfriend and I have been together for two years now. Everything seemed perfect at first, but then he grew insecure and started hitting me. I don't want to act like a victim because I did hit him back. One day it got so bad he had me choking in blood. He got better over time and hasn't hit me since. I met him when I was 17 and he was 18. We had always been careful and had safe sex, but I got off my birth control because I had the implant and wanted to take the pill. I forgot to take it and became pregnant. I didn't know I was pregnant until last week.

When the results turned positive, I wasn't upset but rather happy I told my closest friend and my mom that I was pregnant. When I told my boyfriend he told me to make an appointment at an abortion clinic as soon as possible. I cried and begged him when we would FaceTime to let me keep my child—that if he didn't want to be a part of our lives, he didn't have to. My mother even offered to help me take care of my baby because she wanted me to finish school. He told me, “no,” it was just a bunch of cells and that I was being selfish for wanting to keep it. So I did what he asked and made the appointment. I made the appointment at a clinic close to where he lives in Santa Ana. Mind you, I live in San Diego county. That was two days ago.

I took the earliest metro link train to Fullerton and there he picked me up to go to Santa Ana. He was mad durning the whole car ride. He didn't speak a word to me except to ask me what time was the appointment was—and he kept asking and asking for the time. I cried in the car trying to make him see that I did not want to do this. We finally arrived at the clinic and I paid for it myself—$500 cash. I went in for my blood work, and the doctor did the ultrasound. I lost it and cried. I took the abortion pill.

My boyfriend was not inside the clinic when I was leaving. He was in his car. He asked me what they did to me and I lost it. When he was driving, he didn't speak until he dropped me off at the Santa Ana train station. He asked me how I could do this. He said he was against abortion. I told him he was the one who insisted I get it. He told me it was all my fault, as always, and that I could have avoided all this. I left the car, texted my mom, sent her a picture of my ultrasound, told her I was six weeks pregnant, and I just had an abortion.

My boyfriend has not really spoken to me, but he texted me that what I did was not okay. I am confused because he was the one telling me to get an abortion. I kept hoping for him to be man enough to tell me to not get it—that he would help out no matter how hard it would have been, but he never did, nor did he even acknowledge my pregnancy. I regret listening to him. I've called an abortion hotline because I feel so alone. I will always live with this guilt.