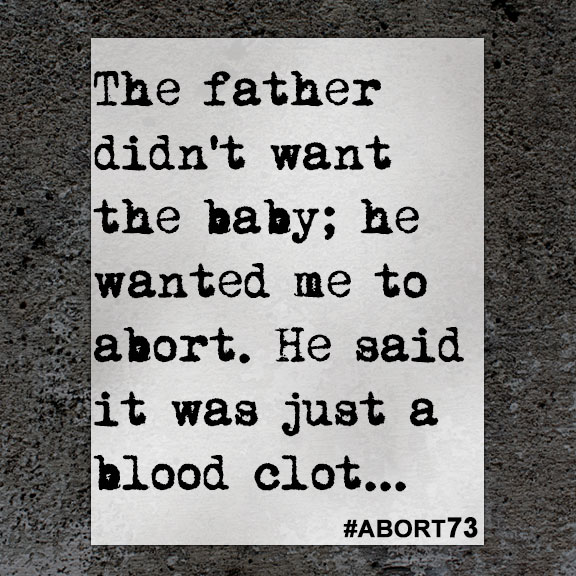 The father didn’t want the baby; he wanted me to abort. He said it was just a blood clot...

I was 25 when I got pregnant; I am now 27. Though time did help me heal, I still have fears and feelings of guilt. I was married to a man who didn’t want kids or anything to do with me. He hit me, but I never got pregnant by him. I discovered he did gay stuff secretly, which just made me think he was gay—but I wasn’t 100% sure and I’m still not sure. The love was gone after five years of dealing with all that. I stayed with him because I had nobody else in this country, and I was afraid and couldn’t afford to live on my own.

However, one day I met a guy who was also married. He told me he knew I was not happy and he wasn’t either. Things went fast, and we started having sex. Even though I asked him to use a condom, he didn’t—but I just kept taking the next-day pill, thinking that was the magical trick. I never thought I could get pregnant easily or that it was possible. One day I really felt it. I didn’t take the pill as early as I did the other times, and I knew I was pregnant already. I had the feeling. Once I tested positive I was shocked, but my first thought wasn't abortion. It was, what am I going to do? I told a "friend.” She told me she had had an abortion with a pill and that it was very easy—that it was like a period. I told her no; I have seen videos. She kept talking about it to convince me.

I went to the clinic to do another test. They asked me if I wanted to keep it or know my options, as if it was their business, and they gave me this paper with info about abortion clinics and their prices! So sad! But I said I would talk to the father and then decide. The father didn’t want the baby; he wanted me to abort. He said it was just a blood clot. I felt alone, and I felt I had no choice because as my coworker said, how was I gonna pay rent and daycare with a low paying job? But then I realized there were options. The day I took the pill I felt so nauseous. I bled the next and cried, but still wasn’t thinking about what I was doing—killing my baby! I took the other pills and realized that deep in my heart, I loved that baby, but I was too late. I kept saying, “Where is my baby?” I had nightmares; I went to the emergency room to get an ultrasound and see if I could save the baby. Obviously, it was too late. I cried uncontrollably almost all day. I used to be a happy woman with a smile. It isn’t like that anymore. People noticed and asked. Then I also had to deal with my father's death.

With all that I went through I am definitely sure abortion is not an option. Anyone who says they don’t feel guilty is lying, or will feel it later. I was in a psychological treatment for more than a year and went to church and retreats where old women still regret the abortion. Slowly this helped me heal. But I still have fears about the future, I'm afraid to get pregnant. but at the same time I wonder if I will ever have children. What if that was the only chance I had? If you are thinking about abortion, please don’t think it is a solution. Find a real solution; you will never regret having a child.  If you already did it, please be strong seek help and seek God. You will be forgiven.