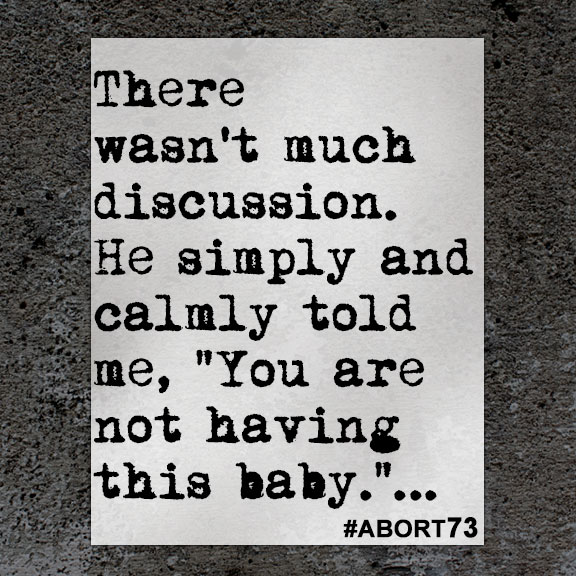 There wasn't much discussion. He simply and calmly told me, “You are not having this baby.”...

I've never openly written about my experiences, nor talked about them much. I am 26, a secretary. I have a boyfriend who has a 5-year-old son, which is truly a daily battle for me—as you will soon understand. I have severe anxiety, and around the age of 21, I was having panic attacks daily. I could no longer take it, so I finally went to the ER to see if they could help me at all. They gave me some news I was not quite ready for. I was pregnant. Now this was with someone different than who I am with currently. Our relationship was never solid or good, and that is something I also choose not to speak of.

Terrified and not even sure if I could repeat to anyone else what I had just been told, I took a few moments to gather myself. The nurse at the ER held my hand and told me that everything would be ok. She really comforted me and I needed that. I finally got the nerve to tell my then-boyfriend of three years. There wasn't much discussion. He simply and calmly told me, “You are not having this baby.” And due to the way our relationship had been from the start, I did not argue. Two days later I made the call to get an abortion. The whole process is still so vivid to me. Once we were there, I asked to leave; I didn't want to go in there. But clearly as I'm writing this, you know the outcome.

I was terrified. My boyfriend complained of being hungry and tired and needing to leave me there so he could go to pictures for his little sister’s prom. I had never felt so alone. But somehow I got myself in the room and they did an ultrasound. They give you the option to keep it, but I declined. I still saw my tiny baby and knew what was to come. Fast forward to the procedure, which I don't really want to discuss. It was painful, but I deserved it. l cringed as the nurse stroked my hair and told me I was being so brave—which I'll never understand.

Now to my present boyfriend, whose son would be about my child’s age roughly. It is a daily struggle to do things for him because I think of my own. Unfortunately we ended up getting pregnant two years ago as well, and he did not take things well—to the point of telling me he wanted to kill himself, and other things that frightened me and made me again know that I could not have this baby that I so dearly wanted. And why would I want to have a baby with someone who would rather kill himself than have a family with me? So here I am again. This time I had to have a friend take me because my boyfriend was too busy. I went inside alone—three months pregnant with a baby I wanted keep forever. I again saw my baby on the ultrasound, much bigger than the first. I screamed in pain and wanted it to end, which it never did. I will carry this with me forever. Both of them. I dream of them often, holding them or stroking their soft blonde hair.