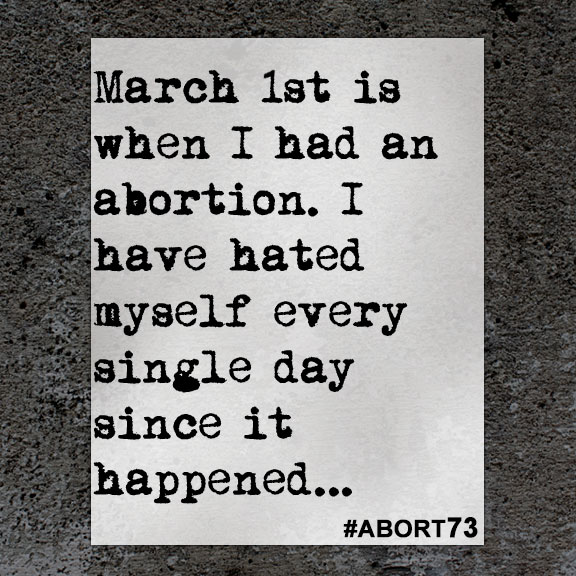 March 1st is when I had an abortion. I have hated myself every single day since it happened...

March 1st is when I had an abortion. I have hated myself every single day since it happened. I did not want to do this at all. I felt forced and was threatened by my ex-husband, that he would take my daughter away from me and gain full custody of her. He was abusive to me in nearly every single way for 12 years and was starting to become emotionally, verbally, and physically abusive to our daughter. I was not pregnant with his child.  I left him in October of 2016 and started a relationship with another man, whom I'd known since we were kids.  I knew it was wrong to start a relationship before my divorce was final, but I did. I thought it was safe because it was a long-distance relationship—meaning we wouldn't see each other very often and therefore I wasn't physically cheating. I went to see my boyfriend in November, and we had unprotected sex. I got pregnant right away; I found out about three weeks later. I told the father and he said he was going to move back home to be with me and our child. I was ecstatic at first, but then quickly became very scared because my divorce was still not final.

Then the unthinkable happened.  My ex-husband hacked into my online medical charts and saw I was pregnant.  He immediately emailed his lawyer with the information. I was horrified to find out that I very well could lose my daughter because he was the sole owner of the marital property in the school district. I was renting a home outside of her school district. My ex also makes twice as much money as I do annually.  He painted himself to look like the perfect husband who'd been cheated on and had to provide stability for our child because I was being so reckless, and not a good role model for our daughter. In all reality, he was anything but that. I'll never forget the torturous two months that I was bombarded with emails, texts, and phone calls pressuring and threatening me to do something that I personally find deplorable and despicable.  He promised me that he would leave me alone if I just went through with an abortion. So I decided to give him what he wanted so he would leave me alone. I was so STRESSED and living in paralyzing fear. I really thought I'd be able to save my baby and trick him into thinking I had gone through with it. Instead, he insisted on taking me himself to ensure I'd go through with it. I wish that I would have fought for my baby, but I didn't. I didn't DO anything. I let it happen to me!! How could I let someone else have so much control over my life? It’s beyond me. I'll never forgive myself or my ex-husband for making me do that. My boyfriend still doesn't know about my abortion. I didn’t trust him to understand that I did it because I was being threatened with my daughter. I felt that I couldn't tell him what was going on with my ex because I didn't want a physical altercation with he and my ex.

We had a miscarriage on June 7th and we've been trying to conceive ever since then. I wanted that baby, our BABY. I can never have it back though, never. I wonder if God will ever forgive me, if I'll ever be able to forgive myself and most importantly, if my precious little baby will ever be able to forgive me for not fighting for his or her life.  I hate myself for it every day of my life, I feel I don’t deserve to live and that I only am still living because I cannot leave my daughter alone with her abusive father. I wonder if keeping this secret from my boyfriend, now fiancé is keeping me from becoming pregnant because of the bad karma that comes with abortion, and double bad karma for lying to the father of our baby because I didn't want to lose him. Aside from my daughter, he's been the best blessing I could have ever imagined. I want nothing more than to have children with this wonderful man and I really truly hope that God will bless us with a child soon.

Don't ever let anyone bully and scare you into something so awful as an abortion. It's illegal to do that to anyone. Call the police if you have to, I wish I had EVERY single day that goes by. Don't be a cowardly, scum-of-the-earth mother like me.  I can tell you that the personal hell and torture you will go through, the sleepless nights are not worth it.  I hope to be able to live a life where I can one day have a happy healthy baby, like the one I let be destroyed because I was too scared to do the right thing. I didn't want my daughter's father to go to jail. So now instead I've created my own prison. There are days I truly wish I was dead, that I don't deserve to live after what happened to my precious little baby, all because I was too afraid. I failed my child who I was supposed to protect and love and keep safe and I didn't. Don't make the same mistake I did. Get help, even the police if necessary.