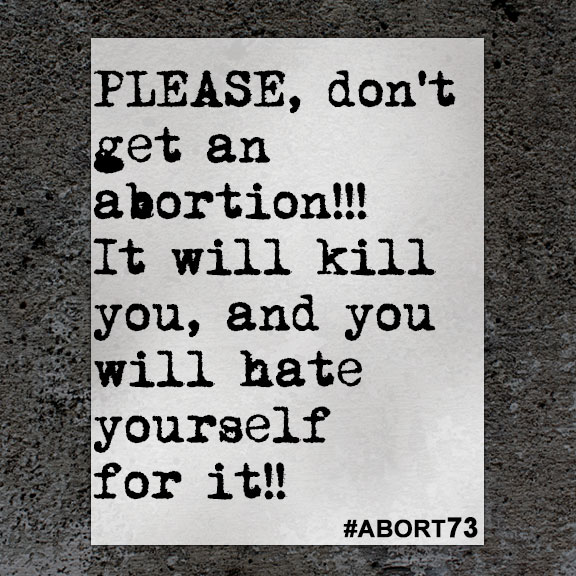 PLEASE, don't get an abortion!!! It will kill you, and you will hate yourself for it!!...

I was 18 when I first got pregnant. I was so scared because I thought my life would be over. How would I take care of my child? When I told my ex-boyfriend he was shocked. He was 17. I found out in school after volleyball practice. I went to my teacher because I felt that I was pregnant and, well, I was. I have to blame myself because I was the first person to mention abortion, but I didn't mean it. After that, all I would get from him is, "GET THE ABORTION!”

I was emotionally abused by him; I had major depression since I was 13 and felt so alone. I couldn't tell my parents because I was afraid. I told my two best friends, who are not my friends now, and they were the only ones who were supporting me. But even with their support, I felt so alone. On top of that, my relationship with my ex ended. He told me he didn't love me and by New Year’s he was seeing this other girl behind my back.

I felt even more alone. He would emotionally abuse me, and I would cry every day. While I was pregnant, I would tell my baby at night, “I love you so much; I hope you know that.” But I was afraid that I would get kicked out and have no one there, and all I kept thinking about was my future—that I wanted to become something. So after all the verbal abuse—like “You’re too young to be a mother; I don't want to be a dad; you will ruin my life; I will hate you; I don't love you”—I decided to get an abortion.

On the day of the abortion, I made him come with me. He didn't want to go, but I said, “If you don’t, I will keep it.” He ended up going and so did my best friend. We went and I got my first ultrasound. I felt regret instantly; they gave me pictures afterwards. At Planned Parenthood, I asked the lady who was taking out blood if I could still change my mind. She said yes, and I asked if I could have time to talk to my ex-boyfriend about the decision. We went to another room and more emotional abuse came. All I wanted for him was to say, “keep it,” but he asked, “Do you really want a f--- boy as a baby?” It killed me because I felt so alone, so I decided to go through it.

I went to another room with my friend to take a pill that stops my pregnancy. The whole time I was there I cried because I knew if I took this pill it would mean my baby would stop growing, so I just chugged the pill fast! And cried and cried. Afterwards, they gave me some prescriptions I needed to finish the abortion at home. All I can say is, it was the most horrible thing in my entire life. All I could think of was the sin I committed and that I would burn.

Here I am, in 2017, still thinking of my unborn child because instead of protecting my baby, I killed it. Then I got pregnant again, my second time, with the same guy, who is my ex. We were on and off; he was still with the other girl, hurting me. I found out because I had a pregnancy test leftover from my last pregnancy. I came home from school and was smoking a cigarette in bathroom. I was like, “Hey, I know I'm not pregnant, let me just pee on this pregnancy test.” It turns out I was pregnant!!!

I was so confused because when I had sex, I went to Walmart to buy t the Plan B. It was two days after the sex, and when I bought the pill, I went to the bathroom to pee and saw that I was on my period, bleeding. So I called my friend and asked her if I should take the pill. Since I was on my period, I thought there was no way I could have been pregnant, but as I said, I was!! And I was so confused and scared all over again.

That night I wanted to tell my ex, but he was being such an a--hole to me and we got in an argument over Kik messenger. I ended up telling him I was pregnant over text and he freaked out. He did the same sh-- as he did when I first got pregnant, but this time I told myself I wouldn't get an abortion. One night after dinner with my parents, I pulled my dad to the side in my room and started crying. My dad called me “my love” and asked why I was crying. I told him, “I’m so sorry for betraying you because I know this is not what you wanted. I'm pregnant.” I thought he would yell or kick me out. Instead he hugged me, and told me everything would be okay. I felt so relieved because I had someone. My mom wasn't happy at all. She told me, “I pray for you to get a miscarriage.”

I decided to keep my baby. I was looking to be in the military after I had my baby, to give my child a better future. I was a senior, and on the first day of school after New Year’s, I woke up with blood in my underwear. I got so scared and called my doctor. They told me it was normal, but I had a feeling it wasn’t. It would not stop bleeding, so I insisted on seeing a doctor. That same day, on my way in, I felt something slide down my vagina. I instantly knew I had lost my baby. When I got there and I got the ultrasound, she told me I had a miscarriage. I cried and cried and cried. I texted my ex and told him, “I hope you’re happy; you got what you wanted.”

After all this, I felt like I had no one. To this day, I cry and think about my two babies and about what of a good mother I could have been. It kills me because I know I would love my baby. It was my blood and flesh, and I lost them. I feel regret every day and blame myself for being a bad mother. I still haven't forgiven myself and never will.  SO PLEASE, don't get an abortion!!! It will kill you, and you will hate yourself for it!! In the end, you will love your baby even if you don't think you can!! It has been two years since my pregnancies. I still feel pain and regret. No woman should go through this  pain!