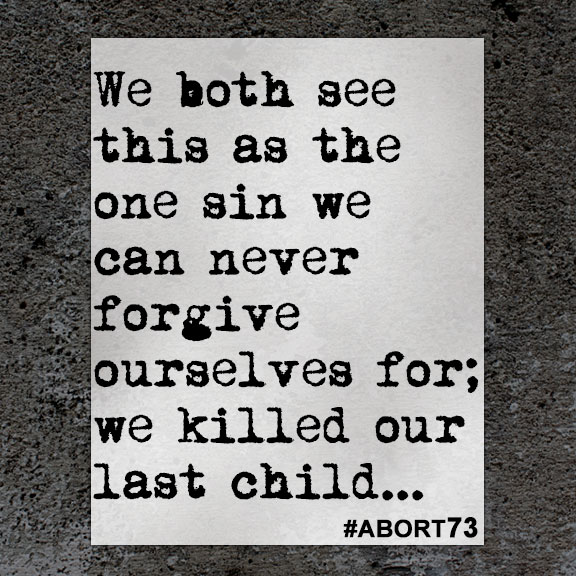 We both see this as the one sin we can never forgive ourselves for; we killed our last child...

My wife and I have two beautiful children and four beautiful grandchildren. We are both 63; she is retired and I will retire in 2019. We are both very committed  to volunteering our time to our church and our community. Both of us are viewed as kind and Christian people, but the view we have of ourselves is much less.

My wife and I met in 1971 and it was an instant attraction. We married three years later. Being raised in a devout Christian household, my wife was a devout Christian and still a virgin. Being raised in a household where both parents were on their second marriage and chose to work second shift, I was neither a true Christian or a virgin.  Although my mother often spoke of the values of Christianity, we never went to church. I had sex with a girl before I was eight and sex with a boy before I was nine. This is relevant to our story.

I have had health issues since I was 20 years-old: Bacterial Endocarditis. Look it up; it is major. I’ve had five open-heart surgeries for Aortic Valve Replacement. My hepatitis C was treated and cured in 2015. When my daughter was born in Jan 1979, we had delayed my second open heart surgery to make sure I’d be alive to see her born. Back then, open heart surgery was much more risky than today. My wife had toxemia when my daughter was born. Toxemia is a poison in the blood which could have killed my wife. Our daughter was our second child; our first was a son, where there were no medical issues to my wife.

Within a year after my daughter was born, my wife was pregnant again. We had a choice to make, because by 1979 abortion was legal. Because my wife had had toxemia in the past, she was a good candidate to get toxemia again. My heart health was so bad that I was uninsurable for life insurance at the age of 25. The thought for me of losing my wife due to toxemia was insurmountable. At my urging, we decided to have an abortion.

There are just a few things that my wife and I will carry as regrets to our graves. But the one thing we have in common is the regret that at the age of 26, we ignorantly decided to abort our next child. We were too young and new to the world to understand all the ramifications. You see, a mother is supposed to nurture her child while a father is supposed to protect and provide for his family. The parents are not supposed to eliminate their child, even if society says it is okay.

You see, we did not give our next child a chance to live,  We did not wait to see if my wife would even get toxemia.  This is the one regret in our lives. After the abortion, my wife shut down sexually. I made up for it by getting involved in multiple affairs with women and couples. Somehow the marriage of my wife and I survived this through Christ, but the abortion has been our only insurmountable regret for the last 37 years. We both see this as the one sin we can never forgive ourselves for; we killed our last child, along with all of the descendants that would have followed.  Please, consider all options before abortion.