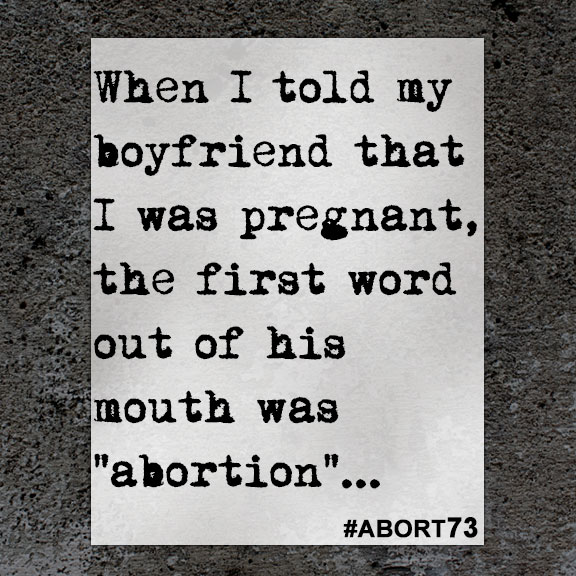 When I told my boyfriend that I was pregnant, the first word out of his mouth was “abortion”...

I grew up in a conservative Christian home where babies were looked at as blessings and Pro-life was the only option. After college, when I was 22 years-old, I found myself pregnant and at the end of a very bad relationship. The baby’s father had just gotten out of the military and had PTSD. He also was on drugs and not in the right mindset to be a father. When I told my boyfriend that I was pregnant, the first word out of his mouth was “abortion.”

The same night I told him I was pregnant, he told me he did not love me and did not want to be a father. I was absolutely devastated. I had no idea what to do or who to turn too. I did not tell any of my friends or my family that I was pregnant. My boyfriend then had an apparent change of heart. He started being extremely loving and caring towards me. He told me that he had a surprise weekend getaway planned for us. I was so excited that he was on board with our future plans.

I got in the car that spring morning and decided to dose off and take a quick nap during the drive. Before I knew it, he was taking me to a sketchy section of downtown Pittsburgh.  It looked like a bunch of abandoned warehouse buildings with people lining the streets in protest. I did not understand what was going on. He explained to me that he had made an appointment for me to be sedated and have an abortion. I was absolutely furious. How dare he do this to me?! I got out of the car and weaved my way through the crowd. A lady in a yellow vest started leading my to the door of the abortion clinic. As I was walking a young college student grabbed my wrist. She told me, “You do not have to do this,” and that Jesus loves me. I looked at her and yelled, “Do not touch me; you have no clue!”

I kept walking right up the stairs to the abortion clinic waiting room. For the first time in my life, I felt like I had a gun being held to my head and was out of options. The waiting room was full of all different kinds of people. A young teenage couple stuck out to me. They looked so scared. I figured if they could do this I could as well. The abortion counseling was a joke. They counseled me into the worst decision of my life. The abortion clinic was very sketchy with a doctor that spoke broken English. In my room, there was a long tube which was used for sucking the fetus out of the uterus. It made me sick to my stomach to think of how many abortions were performed a day.

After the abortion I was experiencing horrible cramps and just wanted to lie down after being heavily sedated. They hurried me out of the resting room because there was a waiting room packed full of woman and girls waiting for their abortion. My boyfriend left me the very next day. I had no furniture and had to figure out how to pay my rent on my own. I felt broken and lost. Time has healed some wounds and I finally forgave myself for my decision. My abortion has haunted me every day since. Not a birthday goes by that I do not think of my Angel. I hope my story inspires and brings reality to the consequences of abortion.