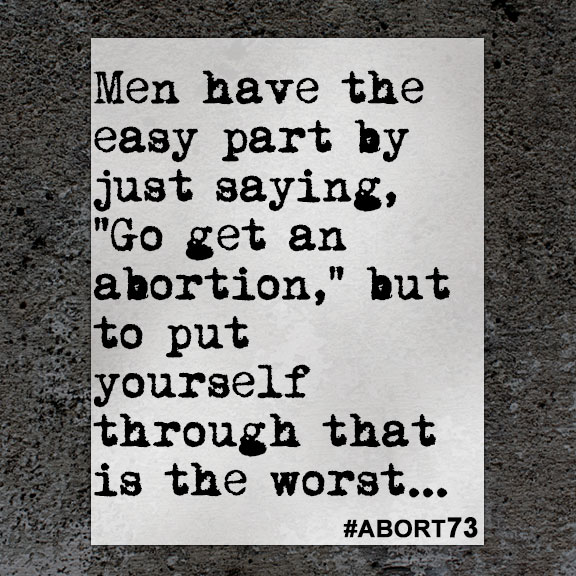 Men have the easy part by just saying, "Go get an abortion,” but to put yourself through that is the worst feeling you can have...

In March of this year I found out I was pregnant. I had no clue what I was going to do. The father instantly freaked. First, because we were not together. Second, he said he was not financially stable enough for another child. He already had two of his own. My office manager at work instantly asked if I was going to keep it. That never even crossed my mind. I was more worried about telling my family. I grew up in a Christian household. Not a strict one, but nonetheless, I knew that abortion is sinful. I spoke with the father and he said to get an abortion. I tried to talk to him about adoption, helping a family that could not have kids. He said he could not live with himself knowing he had a child out in the world that he did not take care of. We argued about it. A few of my friends seemed like it would be so easy to do. They had the mindset that it was not life yet. But to me, a heartbeat meant life. The day I went to the doctor's to have the procedure changed my life forever. The staff asked me, "Are you sure you want to do this? Is anyone making you do this?" I wanted to so badly to say “yes.” I felt like I was being pressured, and I did not want to do this. Men have the easy part by just saying, "Go get an abortion,” but to put yourself through that is the worst feeling you can have. In the end, I went though with it. I regret it every day. I don't think this will ever leave my mind. The staff was so nice, and I never felt judged—even though I was judging myself. But the experience. All those women. I understand each woman has a story, but as I looked around the waiting room, I saw some women playing games, talking to their best friend and laughing, reading or even sleeping. I could not understand how it seemed so simple to them. Like it was just another day. My heart broke as soon as I walked into the building. The drive, the protesters outside, the two-day procedure, it was all draining and for me, just a reminder of what I was doing and how wrong it made me feel. From this point on, I have decided that I’m not going to have children. I feel like it is not right for me to pick and choose which child I want to live. I could have given him up to a family, not ended a life before it began. Some women can find a positive side to this; four months later, I am still trying to.